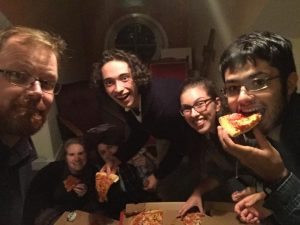 A new team of youth workers have arrived in Cork.

The five from *NET (National Evangelisation Teams) take over from a team that have already spent a year working with the Missionaries of the Sacred Heart (MSC) and the Dominicans.

“I am extremely grateful that I get the opportunity to spread God’s love with others. I am looking forward to sharing my faith with others and growing in my evangelisation skills and deepening my relationship with God,” said Courtney Doucette, one of the team from Vancouver, Canada.

Her fellow Canadians are Sara Dmitri from Edmonton, Alberta, and Travis Snider from North Bay, Ontario. She is 19 years and was baptised just two years ago.

“After a NET team visited my home parish in 2013, I grew into a deeper personal relationship with God and felt this intense yearning from God for me to grow more in love with Him by sharing this ministry in all places,” she said.

The two Irish members of the team are Luke Daly from Dublin and Stephanie Moriarty from Tuam.

She has just finished her Leaving Cert and plans to travel and go to college in the future after she finishes her year in Cork. They will work with young people in parishes, schools and communities in Cork.

Fr Alan Neville MSC said that last year’s team was such a big hit that it was decided to continue with NET youth workers this year.

Rather than spread their efforts far and wide, like last years group, the new team will concentrate on some key activities and areas. 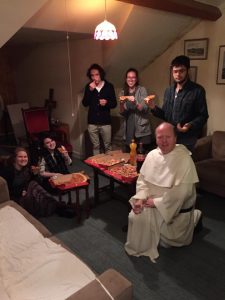 They plan on doing school and other retreats, parish youth work and children’s liturgies. Last year they had a surf retreat which involved spiritual moments, as well as surfing on the local beach.

This year they hope to do a football retreat along similar lines but with football.

NET’s Luke Daly will undoubtedly be in the thick of this as he is a keen footballer.

“The other thing that we are looking at as well this year is developing young adult leadership. So here in Cork we hope to get young adults in our parishes involved because we want to do something that is sustainable,” Fr Alan Neville said.

“I think that is very much part of their (NET) approach and ours.”

This youth initiative is just one of a few in Cork for example there are other active groups such as at ‘The Pres’ (Presentation Brothers Secondary School) and UCC chaplaincy.

They hope to co-ordinate their work more in the future.

“We were starting from a place where there wasn’t a whole lot happening in Cork (in youth work) and now we are seeing something really good,” said Fr Alan Neville.

“I think there is a kind of an awakening, that we can’t be ducking and diving and being undercover about our faith, that we want to stand up and say what we believe,” he explained.

“Now we need to do something different, so when a young person comes to us we can say ‘do you want surfing retreat, pilgrimage or this other event?’”

*NET (National Evangelisation Teams) is a Catholic peer to peer youth ministry that puts into action the Church’s mission to promote and develop the faith of young people.