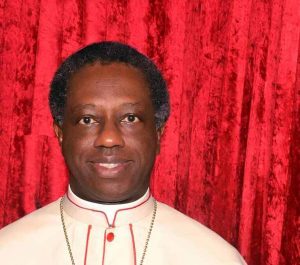 Archbishop Okolo is from Kano in Nigeria, and has a Tipperary connection in that he is originally from the Diocese of Onitsha, Nigeria, where the first bishop was Joseph Ignatius Shanahan (1871–1943) of Borrisoleigh, Co. Tipperary.

The new Nuncio is guest of honour at the awards ceremony and, with Bishop of Waterford and Lismore Most Reverend Alphonsus Cullinan, will award over 110 students from seven different schools across the diocese with Pope John Paul II Award (JPII) medals in Saints Peter & Paul’s Church, Clonmel.

“Many visitors on that day spoke about this wonderful group of ‘youngsters’ who were extremely friendly, helpful and efficient,” he said.

“I am very confident it [JP II Award] will be of great help to all who participate and produce much good for the whole family of the diocese.” 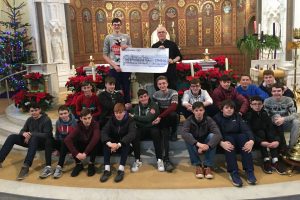 As the awards ceremony approaches on Friday 29 September 2017, Diocesan coordinator Fr Michael Toomey said he has been “astounded” at the enthusiasm and commitment all students have put into this award, which has been running for a year in Clonmel.

“The feedback from the students has been so open and honest that it makes very good reading for priests, parish councils and schools in how to get their enthusiasm and energy back into the church. This award helps everyone to do that,” he said.

Students at the High School Clonmel, Co. Tipperary raised over €1,300 towards the Church Building Fundraiser. In November students offered parishioners the opportunity to have a poinsettia plant with a memory card for a loved one, or a prayer intention card, placed around the altars and cribs for Christmas in both SS Peter & Paul’s and the Church of the Resurrection.

They hoped to place up to 70 plants, but ended up with over 250, which they had to unpack, water and place with the intention cards as part of the decorations around the church for the Christmas season. As well as adding to the Christmas ambiance, they also received a €10 donation for each plant, which went towards the church building fund.

The award is now in its fifth year in the diocese. It encourages young parishioners and students to help in many parish and community ministries, and gives them the opportunity to gain many experiences, realise their talents and enhance their spiritual and personal development. 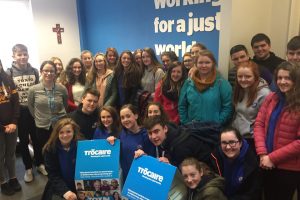 JP II Award works mainly in conjunction with Transition Year classes as part of their Religious Education curriculum. Students aim for a Gold, Silver or Bronze award through the number of hours they do throughout the year. There is an option to develop the award further in fifth/sixth year if the student wishes to obtain the Papal Cross Award. Third Level students can also take part in the Papal Cross Award.

On a parish level, a committee is set up, led by a parish coordinator, to oversee the parish part of the award. There is also a representative from the school who works to oversee the award, along with the Award Committee in the diocese.

The award has been set up with the support of the Knights of St Columbanus.