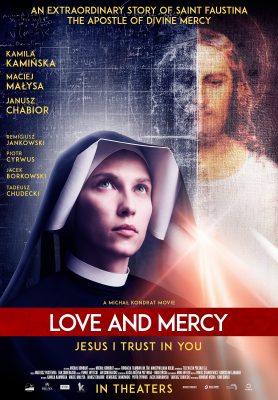 A new full-length feature film about the life and times of visionary saint Maria Faustyna Kowalska is due to hit the silver screen in Ireland this autumn.

The movie Love & Mercy – Faustina, directed by Michael Kondrat, tells the extraordinary story of the woman responsible for the Divine Mercy devotion, which is now part of the Church’s liturgical calendar. The Feast of the Divine Mercy is celebrated on the first Sunday after Easter Sunday.

Sr Faustina claimed she had been told, during visions she had of Our Lord in the 1930s, that anyone who received the Sacrament of Reconciliation followed by the Sacrament of the Eucharist on the Octave of Easter (the Sunday after Easter Sunday) would be granted total forgiveness of all sins and temporal punishments.

Now that Sr Faustina’s visions have been accepted by the Church, a plenary indulgence is now officially granted to those who complete the necessary observances involved in the Divine Mercy devotion.

The Church was initially hostile to Sr Faustina’s revelations. There was a reminder of this at the movie’s Vatican premier when all those present were given a press cutting taken from a 1959 edition of L’Osservatore Romano, the Church’s official newspaper. In the cutting, the faithful were given notice that promotion of the Divine Mercy devotion, as proposed by the Polish sister, was prohibited.

The ban remained in place for 20 years until a Church investigation authenticated Faustina’s mystical experiences. On the advice of her confessor, Sr Faustina kept a diary of her visionary experiences and these writings proved to be fully orthodox and in line with the Church’s teachings.

In the movie, Sr Faustina is played by Kamila Kaminska and the role of her confessor, Fr Michael Sopocko, is played by Maciej Malysa.

The story of Sr Faustina’s life and vocation is a remarkable one. She was born in 1905, in Lodz, Poland, as Helena Kowalska. At the age of 19, while dancing in a park in Lodz, she had her first vision of Jesus. He told her to travel to Warsaw and join a convent. She immediately travelled the 120km to the Polish capital, taking with her only the clothes that she wore, and started applying to join various religious orders. However, she was rejected time and again by various convents because she was too poor.

Eventually, the Congregation of the Sisters of Our Lady of Mercy accepted her on the condition that she could pay for her own religious habit. It took her two years, working as a housemaid, before she could put together the necessary finances.

From 1930 onwards she suffered from a serious illness, but during this time Jesus started to appear to her in her cell. In her visions, Our Lord wore a white garment with red and pale rays emanating from his heart. She directed an artist to devise an image of the vision she had seen and that image is now central to the Divine Mercy devotion.

In 1937, the first prayer cards with the image were printed and the devotion began to spread across the world. At the same time Sr Faustina’s condition worsened and she passed on to eternal life in October 1938. 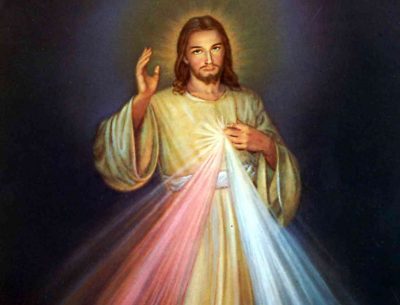 In 1956, an image of the Divine Mercy was blessed by Pope Pius XII. He also founded a religious order, the Congregation of the Most Holy Lord Jesus Christ, Merciful Redeemer, to spread devotion to the Divine Mercy. However, in 1959, Pope John Paul XXIII was persuaded to issue a notice prohibiting the devotion; this was as a result of a faulty translation of the religious sister’s diaries.

However, in 1965, the Archbishop of Krakow, Karol Wojtyla, started to investigate Sr Faustina’s life. As a result, in 1978, the prohibition was lifted. That archbishop went on to become Saint Pope John Paul II. He beatified St Faustina in 1993 and canonised her in 2000.

The film’s UK and Ireland distributor, Remigiusz Farbotko, said he hopes the movie will be released in Ireland in October. “There is a significant gap between the release of the Polish version and the English version because we haven’t just over-dubbed the film,” he said. “It’s a whole new audio version with the actors speaking in English.”

This is the second film about a major Church figure to be directed by Michael Kondrat. His first film, Dwie Korony, released in 2017, told the story of St Maximilian Kolbe.