Students served dinners in Mallow St Gospel Hall, worked on the garden at Our Lady of Lourdes crèche, cared for animals at Limerick Animal Welfare and helped the Franciscan Friars in Moyross. 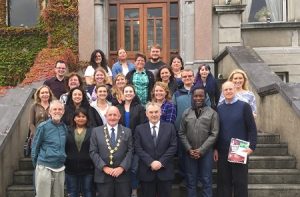 The Mayor of Limerick, Cllr Kieran O’Hanlon, and the President of Mary Immaculate College, Fr Michael A. Hayes, last week welcomed a group of 17 students from the University of New Mexico who were volunteering with community organisations across Limerick City.

The students were part of a 16-day community programme organised by the International Office at Mary Immaculate College.

The programme offers participants opportunities to engage with communities around Limerick while also studying the historical and social context of the city and neighbouring regions.

Throughout their time in Mary Immaculate College, the students worked in various locations and situations, such as serving the Sunday dinners in Mallow St Gospel Hall, working on the garden at Our Lady of Lourdes crèche, assisting with the care of the animals at Limerick Animal Welfare in Kilfinane, spending time with the Franciscan Friars at St Patrick’s Friary in Moyross, learning about the services and operation of Limerick Youth Service, the Blue Box Project, Northside Family Resource Centre, Novas Initiatives and the Daughters of Charity among others.

The students, accompanied by two leaders, Dr David Wright and Professor Albrecht Classen, were committed to serving the community while taking courses in Community Engagement and Medieval Life and Culture.

They also played an active role in the Limerick 2020 bid and Limerick Tidy Towns.

Holly Cowman, Director of the International Office at Mary Immaculate College said, “We have really enjoyed working with these students, who have engaged with each of their placements so admirably. It has made me even more proud of my city to see first-hand through their eyes how well-serviced our communities are by people who really care about making Limerick a great place.”

Dr David Wright, Director of Education Abroad at the University of New Mexico, said of the programme, “We are certainly excited to be in Limerick and to have this opportunity to connect with local service providers in the city. It is through these connections that we learn, being side by side with the providers and the community.”

“Our students have benefitted tremendously from being here and we will share what we have learned with our colleagues back home. Thank you, Mary Immaculate College, for all of your support and we hope to welcome you in Albuquerque someday!”