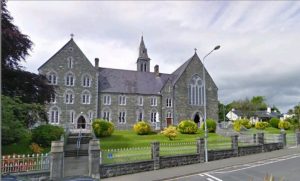 On 14 August four novices were received into the new Franciscan International Novitiate at the Friary in Killarney.

Darragh Quinn, Drew Keeley, and Philip McMahon who are all Irish, and Edvinas Jurgutis from Lithuania, all arrived in time for the Solemn Opening of the new International Novitiate which was held the next day on the Feast of the Assumption of Our Lady.

“The Friary in Killarney celebrates 150 years this year. [It] opened in 1867. After 150 years it is a happy event that it now becomes an Inter Provincial Novitiate House of the Order,” stated the Irish Franciscans. 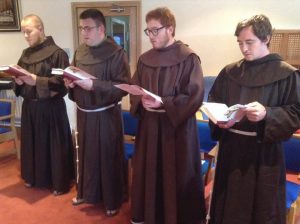 The newly appointed community members at the Friary are Friars Liam McCarthy, Guardian, who took over from Fr Padraig Breheny, who was transferred to Rome.

In July Fr Padraig Breheny said that the planned international status would energise the local house with Dutch, English, German and Irish friars arriving and national and international novices.

He said that the change was because of declining numbers of friars in Europe. However, it will be positive for Killarney as the European friars and novices locate there.

Other newcomers to Killarney are Fr Antony Jukes, Vicar and Novice Master and Fr Claus Scheifele from Germany. Also present in Killarney are Chris Connolly, Lars Frendel from Sweden, and P.J. Brady.

The Franciscans first arrived in Muckross, outside Killarney, around 1448. After the suppression of that Friary, the friars stayed in the area ministering to the people. The last remaining friar from that period left Killarney in 1849.

Belgian friars who were helping to re-establish the English Franciscan Province came to Ireland in 1858 to restore the ailing Irish Province to its former state of observance of the Franciscan Rule. After a short stay in Gorey, they moved to Killarney in 1860. The Killarney Franciscan church was opened in 1867, the Friary in 1879 and in 1902 this became the Novitiate House of the Irish Province and was so for many decades.