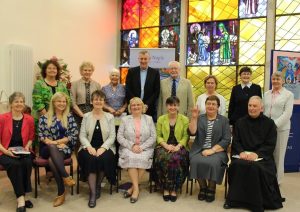 Preparations for next year’s tercentenary of the birth of Nano Nagle got under way last week in Co. Laois with the launch of a new book on the foundress of the Presentation Sisters, who is widely acknowledged to be one of the most pioneering religious figures produced by the Irish Church.

The guest speaker at Mount St Anne’s Conference and Retreat Centre was Benedictine Dom Christopher Dillon, who is a distant relative of Nano Nagle. The event was also attended by Bishop Denis Nulty of Kildare and Leighlin.

Nano Nagle and an Evolving Charism considers the untold contribution made by the founders of the Presentation Sisters to the field of social justice in Ireland and abroad, and also explores her enduring legacy for Christians today.

The editors have invited scholars and theologians to engage with various facets of Nano Nagle’s life, and their essays offer a rich insight into the social milieu in which Nano Nagle was born, her pioneering role as a champion of Catholic education and the formative years of the Presentation Sisters.

The book also highlights how the charism of the congregation’s early members has remained a defining characteristic of their mission today.

According to the Presentation Sisters, the book analyses the vision of the order and its impact on the lives of the impoverished at home and overseas, and the example their mission offers to educators, leaders and care providers across the globe in the twenty-first century. 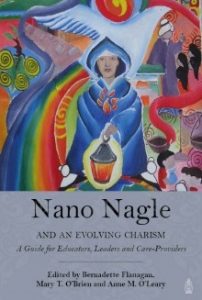 According to John Markey OP, Professor of Theology, Oblate School of Theology in San Antonio, Nano Nagle and an Evolving Charism should serve as a kind of template for spiritual traditions and religious communities attempting to recover, interpret and re-imagine their charism in a global context.

“Both scholarly and accessible, this text offers an excellent introduction to those unfamiliar with Nano Nagle and a profound theological reflection to those immersed in her legacy. This remarkable book not only explores the life and work of the foundress, but also presents a wider investigation into spirituality and social action in the contemporary world.”

Diarmuid Ó Murchú, the author of Religious Life in the 21st Century: The Prospect of Refounding, said the collection of essays provides the reader with an inspiring overview of Nano Nagle’s charismatic vision.

“From the poverty-stricken and colonial context of 18th century Ireland, Nano Nagle lit a flame for freedom through education, leaving us a legacy that continues to grow and expand into the complex world of the 21st century.”

According to Dr Phyllis Zagano, Senior Research Associate-in-Residence, Hofstra University, in the USA, “This history of the sisters of the Presentation of the Blessed Virgin Mary shows how the seeds of hope sown in 18th century Ireland by Nano Nagle were nurtured and grown by generations of her visionary followers.”

She added that anyone interested in the ministry of women will want to follow their joyful charism as it spread far and wide.

Sr Bernadette Flanagan PBVM is collaborating as co-editor with Professor László Zsolnai, University of Budapest, on The Routledge Handbook of Spirituality and Society (2018). She currently serves on the leadership team of the Presentation Sisters in the North East Province, Ireland.

Sr Anne M. O’Leary lectured in education at University College Cork and Mary Immaculate College, University of Limerick, and in New Testament at St Mary’s University, San Antonio, Texas prior to serving on the Congregational Leadership Team of the Presentation Sisters (2012–present).

Sr Mary T. O’Brien has served as a teacher at second and third Level and in administration. She is a published author, has been Communications Officer for the Irish Episcopal Conference, 2003–2008, and is currently Lecturer in Sacred Scripture at Mary Immaculate College, University of Limerick.

The book is published by Veritas and is available now from their shops nationwide and from www.veritas.ie. 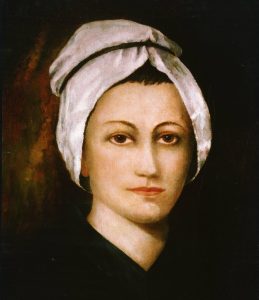 Nano Nagle (christened Honora) was born in 1718 of a long-standing Catholic family at Ballygriffin near Mallow in North Cork. Her home lay in the beautiful valley of the Blackwater, backed by the Nagle Mountains to the south.

Her father was Garret Nagle, a wealthy landowner in the area; her mother, Ann Mathews, was from an equally prominent family in Co. Tipperary. Like others of the old Catholic gentry, the Nagles had managed to hold on to most of their land and wealth during the era of the Penal Laws in the eighteenth century.

Edmund Burke, the famous parliamentarian and orator, who was a relative of Nano Nagle on his mother’s side, and had spent his early years in Ballygriffin, described those laws in one trenchant sentence: “Their declared object was to reduce the Catholics in Ireland to a miserable populace, without property, without estimation, without education.”

Specifically the very first Act of 1695, at one stroke, made it unlawful for them to open a Catholic school at home, and at the same time, forbade them to travel overseas for their education.

The Nagles also had a branch of the family who were merchants in Cork city, with strong connections on the Continent, particularly in France. It was through these channels that Nano and her sister Ann were able to travel to Paris, smuggled, perhaps, in a cargo ship, where they received a full Catholic education and also enjoyed a sophisticated life in French society. But there they also saw the plight of the poor, as a memoir records.

After their father’s death, she and her sister returned to Ireland and went to live with their mother in Dublin, where they also found widespread poverty. When Nano discovered that her sister Ann had given away a valuable piece of silk to relieve a distressed family, it set her thinking about how she herself might serve the poor.

At first this sent her back to Paris to find her vocation, as she thought, in praying for them as a member of a religious order. However, it was while she was there that a perceptive spiritual director advised her to return to Ireland and take up the education of deprived children there.

She went back to Cork, where her brother Joseph lived, to set up her first little school for the poor, modelled on the “petites écoles” she had seen in France, in a rented mud cabin in Cove Lane, in defiance of the law, and in complete secrecy at first, even from her brother. Her secret was soon discovered by him, as she described in a letter to a friend: “This passed on very well until one day a poor man came to him, begging to speak to me to take his child into my school. On which he came to his wife and me, laughing at the conceit of a man who thought I was in the situation of a school mistress. Then I owned up that I had set up a school.”

Her brother was very angry with her at first, because of the risks involved, but later became reconciled and gave her his full support.

The first school in Cove Lane had about thirty children, all the poorest of the poor, in accordance with her purpose from the beginning. Support and pupils soon poured in; within a year the numbers had risen to two hundred: there were five schools for girls and two for boys.

By the time of her death in 1784 she had set up a whole network of such schools in the city, with over four hundred pupils in seven parishes. To support them she used her own considerable wealth, inherited after the death of her uncle Joseph, and when even this ran out, she became a beggar on the streets, at times looking so poor that she was offered alms for herself by passing strangers!

True to her own religious education, the main aim of her schools was to provide a sound religious education based on the Douai catechism she would have learned in France. However, being a realist with her feet firmly on the ground, she did not neglect the need for a general education in the basic forms of reading, writing and simple arithmetic.

With an eye to the practical, she introduced classes in needlework, lace-making, and other crafts, designed to enable students to learn their livelihood and to gain a foothold in society. To a large extent, in the absence of models for this kind of education in Ireland, Nano had to become an educator in her own right. Her abiding conviction was: “We must prefer the schools to all others.”

To put her schools on a more lasting and more professional basis, she decided to bring Ursuline Sisters from France to teach in Cork. But, for various reasons, the experiment as it materialised did not fit in with Nano’s vision.

This led to her setting up her own congregation of religious sisters under a constitution suited to their special vocation of educating the poor. Thus was established, on Christmas Eve 1775, what was at first entitled “The Sisters of Charitable Instruction of the Sacred Heart of Jesus”, Nano’s preferred title, which was later to become the “Presentation Sisters of the Blessed Virgin Mary” (PBVM), as they are still called.

Nano was the Order’s first superior, known officially as Miss Nagle under the Penal Laws which still prevailed. Her sisters in religion were called Nano’s Walking Nuns. She herself was to become famous as the Lady with the Lantern.

Nano’s heart was always centred on the poor and her work did not end with the end of class in her schools; it continued in her visits to the poor in their homes in the back streets of Cork. Dr Coppinger, her first biographer, described her on those rounds:

“How often have we seen her, after a well-spent day, returning through the darkness of the night, dripping with rain, mingled in the busy crowd, move thoughtfully along by the faint glimmering of a wretched lantern.”

Her lantern has now become the symbol of the Presentation Sisters all over the world.

All this was sustained by her deep spirituality, her spirit of mortification, and her long hours spent on her knees in prayer.

It was only after her death, when they were preparing her for burial, that this was revealed, as Dr Coppinger records: “In paying the last attention to her dead body, they found that her knees had long been in a state of ulceration.”

In her life, as in death, she showed all the marks of sanctity, thus fulfilling the prophetic words of her father, who said of his daughter, “Poor Nano will yet be a saint.”

She died on Monday 26 April 1784, aged sixty-five years, surrounded by her little community. Her last message to them was: “Love one another as you have hitherto done. Spend your lives for the poor.”

Two years before her death, a Relief Bill in 1782 allowed Catholics to open their first schools in Ireland since 1695. Nano’s ‘little schools’ had now emerged from the shadows; her vision had become a reality.

Single-handedly she had laid foundations of an educational system, which was to inspire Blessed Edmund Rice, founder of the Presentation and Christian Brothers, and a number of valiant women such as Mary Aikenhead and the Sisters of Charity, Catherine McCauley and her Sisters of Mercy, and Margaret Aylward, foundress of the Holy Faith Sisters, to establish their own schools during the following century.