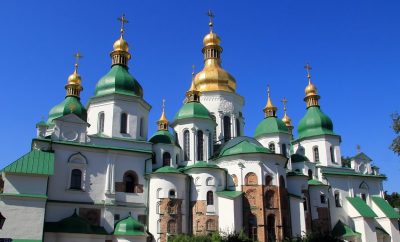 We pray for Church unity at every Mass, so it is with sadness that we note that political tensions in Eastern Europe have created a schism in the Orthodox Church, with the Ukrainian Church breaking away from Moscow.

The move was largely orchestrated by Ukraine’s president Petro Poroshenko in response to continuing tension, and indeed violence, between Ukrainian forces and Russian-backed separatists in the east of the country.

Following the 2014 Ukranian revolution, when the Russian-backed President Viktor Yanukovych was deposed and a more EU-friendly government took power, Russia annexed the Crimean peninsula, an area of major strategic importance in the region, which had been systematically settled by Russians to the detriment of the Ukrainian and Tatar population.

In the east of the country, in the Donbass region, there is bitter conflict between the Ukrainian military and separatists armed with Russian weaponry, where it is reckoned there have been more than 10,000 people killed in the last four years.

The new unified Ukrainian Orthodox Church declared autocephaly (independence) from the Patriarch of Moscow on Saturday, following a meeting of delegates at St Sophia’s Cathedral in Kiev. President Poroshenko was delighted: “This day is a sacred day, the day we created an autocephalous local Orthodox Church. It is a day of final independence from Russia.”

Since the fall of communism in Russia and the ending of the Union of Soviet Socialist Republics, the ties between the Russian state and the Orthodox Church have grown stronger. Notably, President Vladimir Putin has used the Russian Orthodox Church to underline his nationalist credentials.

Saturday’s declaration of autocephaly was little more than a formality, as a synod-led Patriarch Bartholomew in October ruled that two Ukrainian bishops who had formed splinter groups should be reinstated, and their followers allowed communion, after the Moscow Patriarchate had excommunicated them. Because these breakaway bishops are now joined to the mainstream Orthodox church centred in Kiev, the new independent church is being called the Unified Orthodox Church of Ukraine.

The Vatican is attempting to maintain complete neutrality on the issue. Last week, before the autocephaly announcement, the Papal Nuncio in Kiev, Archbishop Claudio Gugerotti, issued a statement saying: “The apostolic nunciature in Ukraine once again confirms its position, often stated by the Holy See, for whom questions of the creation of one Ukrainian Orthodox local church is an internal matter of the Orthodox Church, regarding which the Holy See has not and does not intend to offer any assessment.”