Home > Featured > “We need unequivocally to reject a culture of violence” 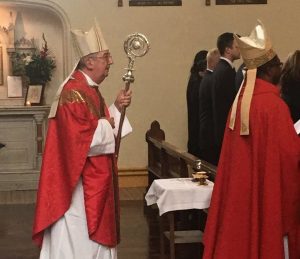 Archbishop Diarmuid Martin of Dublin has called for an unequivocal rejection of the culture of violence by Irish society.

Celebrating Mass for the Commencement of the Michaelmas law term at St Michan’s Church in Dublin, the Archbishop called for a rejection of the violence of criminal drug gangs and the exploitation by gangland criminals of “fragile young people” who have fallen victim to the drugs trade, which he termed as a “business of death”.

Addressing members of the legal profession, Archbishop Martin called for more to be done to tackle the “violence and character assassination perpetrated under the anonymity of social media”.

Violence, he noted, is not just physical violence.

Referring to the hymn to the Holy Spirit sung during the Mass, he noted that it begins with the affirmation that the Spirit is the “Father of the poor”.

The formulation and the application of principles of law must always be focused on “curbing the arrogance of the powerful and protecting and fostering the rights of those who are on the margins of society and cannot speak for themselves”.

Elsewhere in his homily, Archbishop Martin underlined that in a diverse and pluralist society, the voice of the Spirit may come from unexpected sources.

But pluralism, he stressed, must be constructed.

“Pluralism can be sought in a climate of respect and difference. It can also be a negative force for division and antagonism.”

He said a sense of national purpose was needed as well as the learning anew of a language and conversation of civility that constructs and is not simply negative and insensitive.

“We need to criticise but we also need to recognise and even rejoice in the success of others.”

On Monday, the President of the Methodist Church in Ireland Rev Dr Laurence Graham delivered the sermon at the start of the Michaelmas Law Term at a service in St Michan’s Church of Ireland church.

In his sermon, Rev Graham described law as “crucial” for the proper functioning of any society and for the protection of the rights of everyone, especially the weakest in society.

Rev Graham said we were all aware of some places around the world where that is not the case and large numbers of people are voiceless, with little or no chance to defend themselves.

“But thank God for the law in Ireland and I thank God for lawyers, for people committed to giving a voice to those who might otherwise be voiceless.”

Saluting the members of the legal profession, he prayed that God would guide and strengthen them as they seek to speak on behalf of those for whom they advocate.

He also reminded the congregation that grace can do what law cannot.

“Grace can transform people by setting them free while changing them from the inside. Law is absolutely necessary for the regulation of human society but only grace can change us on the inside and it is only by grace that we can meet personally with God.”