National Office for Vocations to be set up in Maynooth 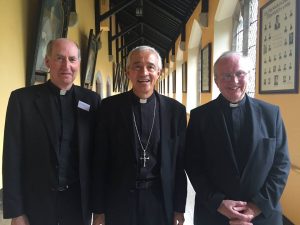 One of the biggest challenges facing the Irish Church at the moment is the shortage of candidates coming forward to priesthood and religious life, Bishop Denis Brennan has said.

However, he stressed that a cultural shift had begun before the scandals broke.

“They didn’t cause it but they certainly didn’t help, especially in the negative way they allowed priesthood and religious life to be portrayed.”

This sharp decline in numbers studying for the priesthood, he said, obviously has huge implications for the future shape of ministry. “It also impacts on the present by undermining and sapping our morale.”

According to Dr Brennan, the effect of this should not be underestimated. “I know farmers and business people, who when they realise that none of the family are interested in continuing on the farm or in the business, sell up.”

“They lose heart, they see no point in continuing when it becomes obvious that nobody is going to carry on the business. This realisation can take its toll in priesthood and religious life too.”

The cumulative effect of all this is that many Church people are unsure about the future.

“In the face of this uncertainty we need to remember that we are not the first generation of Christians to be anxious about the future, to wonder what will happen to us, to the faith we cherish, and what we are called to do by God in the midst of our uncertainty.”

He suggested that priesthood and religious life need a context of faith and practice, a context where they are understood, appreciated and supported.

He recalled three things the Pope requested the faithful to do in the Year of Consecrated Life:

“I believe that this way of looking at life applies to what we are about as well, looking at priesthood and religious life, past present and future.”

Looking to the past should not be in the words of the Holy Father “an exercise in archaeology” but an opportunity “to give thanks for a journey which for all its light and shadow, has been a time of grace, marked by the presence of the Spirit.”

Bishop Brennan also announced that over the past year the Council for Vocations has been exploring the possibility of setting up a National Office for Vocations in Maynooth.

Its mission would be to:

It is envisaged that the proposed office would work in cooperation with Vocations Ireland.

He said that at its summer meeting the Episcopal Conference agreed in principle to the proposal, subject to its nature and function being discerned in consultation with vocational directors.

He concluded by reminding the faithful that fostering vocations is the task of some and the responsibility of all.

The keynote speaker at the conference was Archbishop Jorge Carlos Patrón Wong, Secretary for Seminaries of the Congregation for Clergy, at the Vatican who addressed the conference on the challenges facing vocations in the contemporary world.

Archbishop Patrón Wong emphasised the importance of discernment and accompaniment of vocations. He also underlined the growing significance of a propaedeutic (pre-seminary) period as a vital aspect of priestly formation.

The Archbishop addressed the Summer General Meeting of the Irish Catholic Bishops’ Conference.

An interview with Archbishop Patron Wong with CatholicNews.ie can be heard here: https://audioboom.com/boos/4685124-interview-with-archbishop-jorge-carlos-patron-wong-secretary-for-seminaries-of-the-congregation-for-the-clergy