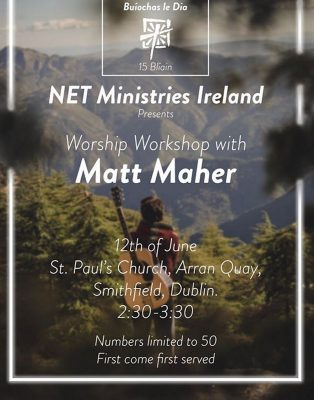 NET Ministries continues its celebration of 15 years in Ireland this weekend with a young adults’ retreat, To the Heights, in Rossnowlagh, Co Donegal.

Next Wednesday, 12 June, a final celebration will take the form of a concert by Catholic musician Matt Maher in St Paul’s, Arran Quay, in Dublin. The visit of Mr Maher, organised in conjunction with Spirit Radio, will also feature an exclusive ticketed workshop on leading worship before the concert.

Forty-six missionaries who have been working with NET since late August are now set to return home for the summer.

Marking the 15th anniversary and the ending of the year of mission for these young people, last weekend Archbishop Eamon Martin, Bishop Alan McGuckian and Bishop Philip Boyce celebrated a thanksgiving Mass at Letterkenny cathedral.

“NET demonstrates how the Spirit can call and equip young people for the service of the Gospel,” Archbishop Eamon Martin told the missionaries, who were joined by priests, religious, friends from host homes, benefactors and family members.

Referring to the synod on youth, Archbishop Martin said it had shown him the power of the Holy Spirit to “rejuvenate the Church”. The apostolic work of NET was one of the ways that new hope was already happening, he added, emphasising however that it is not only young people who give to this important work.

“It is my prayer that all the lay faithful will realise that we are all called by Baptism and Confirmation to be a part of a new springtime for the faith.”

Among those in the congregation at the Mass were some of the young people the missionaries had befriended during the year. One local woman spoke of the impact that the presence of the Letterkenny team had had on her 13-year-old daughter.

“We have faith as a family, but the example of the NET team has helped her to choose her faith for herself. It’s such a crucial age, beginning secondary school and all the pressure that goes with it, but the team has been so important in helping to grow her confidence. I’ve seen her just blossom this year.

“NET does such important work for the Church,” she added. 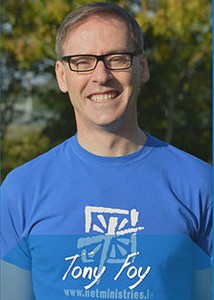 NET CEO Tony Foy paid tribute to the Bishop Emeritus of Raphoe, Philip Boyce, who had been instrumental in bringing NET to Ireland 15 years ago. “He saw something in NET that was good and that would reach people.”

Responding and taking stock of all that had happened in their time in Ireland, Bishop Boyce said it continued to be a great joy to him to see so many young people alive in their faith.

NET (National Evangelisation Teams) first began in the United States, and soon spread to Canada. From there, the first pilot team was sent to Ireland in 2004. The organisation now also works in Scotland, Uganda, Australia and South Africa.

NET Ireland also sends teams each year to put on week-long retreats in Germany, Rome and the Middle East. But the main focus of the ministry remains in Ireland doing school retreats, Confirmation programmes, youth groups and even surfing retreat weekends at their training centre in Rossnowlagh, Co Donegal.

This year their missionaries were spread among five local teams serving in parishes in Castlebar, Booterstown, Meath, Cork, and Letterkenny; a vocations team; and a road team which travelled the country meeting young people in schools and parishes.

In the autumn, the hope is to have 50 missionaries, and to increase the number of teams to eight.