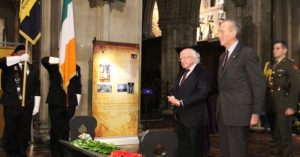 Last weekend’s booing of Republic of Ireland soccer star James McClean by Manchester City and West Bromwich Albion fans over his refusal to wear a poppy has been slated by a top Church of Ireland clergyman as “disgraceful”.

At the annual national Service of Remembrance at St Patrick’s Cathedral in Dublin for those who died in World War I, Canon Peter Campion, whose grandfather and two great-uncles fought at Gallipoli, said he admired McClean for refusing to wear the poppy.

“He shows great restraint, strength and integrity in enduring these annual taunts, but it must be very difficult and hurtful for him nonetheless,” he told the congregation, which included President Michael D Higgins who laid a wreath at the war memorial in the Cathedral while Minister Charlie Flanagan read a lesson.

Canon Campion explained on Sunday that he wore a poppy each year to remember his grandfather and his two great-uncles who were among the fortunate ones who came back from the War, as well as to remember the 50,000 Irish and others who were not so fortunate. “I don’t expect people to admire me for wearing the poppy, but I hope they will respect my choice.”

He criticised the “ostentatious” wearing of poppies by everyone from sports commentators and X Factor judges and contestants almost as a fashion statement, and stressed that the poppy was “a symbol of memorial of the grim reality of the terrible loss of life. 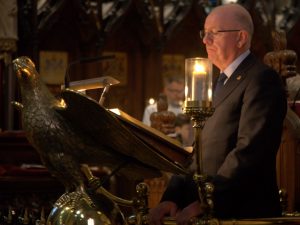 “So why do I admire rather than just respect James McClean? It isn’t for his gritty toughness which makes every member of the opposition team look over their shoulder, wondering where he is on the pitch. No, it is because he chooses not to wear a poppy.

“He has never made an issue of it but others have made it an issue. When questioned about his decision not to wear the poppy, he says that being from Derry, Bloody Sunday is still a reminder to him of the painful presence of British soldiers at that time. He shows great restraint, strength and integrity in enduring these annual taunts, but it must be very difficult and hurtful for him nonetheless.”

Canon Campion also recalled how when his grandfather returned to Ireland from World War I, he did not receive a hero’s welcome in Ireland, “quite the opposite. He was often derided and scorned for his decision to enter the British Army. Some felt that he was a traitor; he should have been at home fighting for Ireland’s independence.”

When a Service of Remembrance was held in St Patrick’s Cathedral at the end of the War, protestors outside the entrance to the Cathedral voiced their opinions strongly.

“This must have been hard on those who had felt that they were away protecting this land. I am sure that my grandfather handled the taunts that he received with restraint and integrity, but I know from my mother that he found them very hurtful. Having left Trinity College to go to war aged seventeen, he returned to the university again after the War and was ordained a priest in the Church of Ireland. He went on to become Dean of Ferns and died not much older than I am now from a heart condition which was the lingering result of war injuries when he had been hospitalised in Egypt.”

The poem ‘In Flanders Fields’ by Canadian poet, physician, artist and author Lieutenant John McCrea was inspired by the funeral of a fellow soldier Alexis Heimer, who died in the second battle of Ypres in the Flanders region of Belgium.

It is because of this poem, and its references to the red poppies that grew over the graves of fallen soldiers, that the remembrance poppy has become one of the world’s most recognised symbols for soldiers who have died in conflict.

“I think John McCrea would be horrified to think that this symbol could become a symbol of division, or national identity, or even a fashion statement. It is quite simply a symbol of memorial, of the grim reality of the terrible loss of life, the heroic and the selfless as well as the needless and the thoughtless. John McCrea simply wanted to remember and honour his friend,” Canon Campion said.

Sunday was the first time a member of Sinn Féin attended the ceremony at the Church of Ireland Cathedral.

Sinn Féin deputy leader Mary Lou McDonald said she was there because “I believe in respect and honour for our dead and I believe in forging ahead now in a very thoughtful, considered and determined way to unite people and to build reconciliation.” 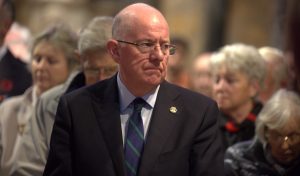 Minister Charlie Flanagan wearing a poppy pin to commemorate all those who died in World War I. Pic: courtesy Patrick Hugh Lynch

She told CatholicIreland.net that this time last year, “I visited Flanders fields with Martin McGuinness – it was a wonderful trip. Little did I know that a year later I would be here and he wouldn’t.”

Of her attendance at the service of remembrance, she commented, “It is a first and it won’t be the last.”

Minister for Justice and Equality, Charlie Flanagan told CatholicIreland.net that he has worn a poppy for the last 25 years. “In Portlaoise we have had a Remembrance Day ceremony at the cenotaph since 1990. For the last three years I was in Belfast as Minister for Foreign Affairs.