“Music is a central element of our Catholic worship” – Bishop Nulty 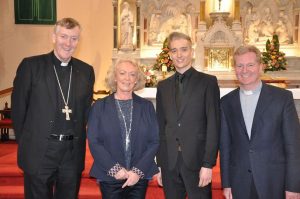 The Bishop of Kildare and Leighlin has weighed into the debate on the importance of music in serving and enhancing prayer and the Mass, describing it as a “central element” of Catholic worship.

The composition is entitled Mass of the People and it was performed for the first time by a local choir, ‘In Caelo’, under the baton of Cora Coffey.

Sunday’s event also featured two additional pieces by Padraig Meredith, including a first performance by the Fox sisters of a new psalm entitled ‘In God Alone’ and the Communion hymn ‘Our Blessing Cup’ performed by Teresa Lynch.

Speaking at Sunday’s Mass, Bishop Nulty said music is an integral element of most faiths. “We give thanks and praise to God through our music and it reveals the truths of our faith.”

Dr Nulty said instrumental music can express both human emotions before God and God’s healing presence to us in a way that no other medium can.

“There is nothing to equal the oboe, the harp and the flute during an offertory procession. There is equally nothing more beautiful than to hear a choir like ‘In Caelo’ who have been rehearsing these new Mass parts composed by Padraig for weeks.”

He paid tribute to the new work, saying it had enhanced prayer.

Padraig Meredith works as a music teacher at the Holy Family Community School, Rathcoole. He also works as an accompanist and session musician in a variety of genres from Church to choral to rock music.

He has performed at World Youth Days in Toronto, Cologne, Sydney and Madrid.

He composed the theme song for the Dublin Diocesan ‘Year of Evangelisation’ called ‘Raise Your Voice’. He also composed the score for the Irish dance and musical theatre work The Cloak, which is based on the life of St Brigid, along with writer Padraig Dunne.

Commenting on how he came to write the new Mass setting, Padraig Meredith said, “The Mass came about through my long association with ‘In Caelo’ choir and their musical director Cora Coffey. I have written many Church pieces, but I never had the kind of response from performers which I receive every time I bring ‘In Caelo’ a new piece.”

“I wanted to thank the choir for their support over the years by composing a special piece for them, but that didn’t seem enough so I decided to compose an entire Mass setting for them. The setting is called Mass of the People because it is a gift not just for ‘In Caelo’, but for all the parishioners of Newbridge.”

He explained that he has worked in Newbridge parish for the past 24 years, first as an altar server, then as a junior sacristan, as a helper on the annual Lourdes pilgrimage, and as a choir member singing with the tenors in ‘In Caelo’. “I went on to play piano for ‘In Caelo’ and eventually turned to composing for them,” he said.

Speaking about the launch of the new Mass, Fr Paul Dempsey, parish priest of St Conleth’s said, “Sunday 26 February marked a significant day in our parish diary as we launched Padraig’s Mass of the People. Down through the years, Padraig has been most generous in giving of his time to enhance the liturgy in the parish through his musical talent. He is a very gifted musician and we are extremely fortunate to be able to draw on this giftedness.”

Fr Dempsey added, “As the Church faces many challenges in a changed and changing culture, many people drift along as many familiar anchors in society have disappeared. As a Church we must respond by inviting people to participate in the liturgy – a liturgy that is vibrant, joyful and well prepared, a liturgy that will touch people’s hearts and help them experience the deep love of Jesus Christ.”

He continued, “Good music is critical to this and contributes to the Eucharist being the ‘summit and source’ of the Church’s life. Through his new Mass setting, Mass of the People, Padraig is making a major contribution to the life of the Church in Ireland today.”

The new Gloria from Padraig Meredith’s Mass of the People can be heard here: (Copyright of the composer must be respected)