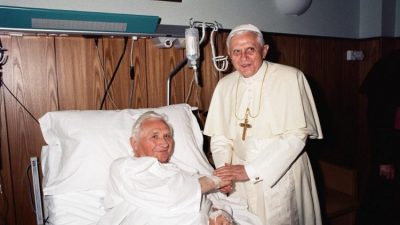 Vatican News has reported the death of Monsignor Georg Ratzinger, the brother of Pope emeritus Benedict XVI, who passed away on Wednesday morning at 96 years of age. Monsignor Ratzinger lived most of his life in the city of Regensburg, a Bavarian city on the Danube River in southeast Germany, which is where he had been hospitalised and spent his last days. The pope emeritus remains the only member of the family still alive, and recently made a final journey by plane to visit his brother in hospital.

Monsignor Georg Ratzinger was a musician and kappellmeister of a famous choir, and was ordained a priest on the same day as his brother. The two brothers are reported to have remained close throughout their clerical, busy lives.

While the papacy was not for him, Msgr Georg Ratzinger had a life full of his own challenges and achievements. He was born on 15 January 1924 in Pleiskirchen, Bavaria, and began playing the organ in his parish church at 11 years of age.

He entered a minor seminary in 1935, but seven years later was conscripted to the Reich Labour Service and later in the Wehrmacht, which led him to fight in Italy. He was captured by the Allies in March 1945 and remained a prisoner in Naples for several months before being released and allowed to return to his family.

In 1947, 12 years after having originally entered seminary, he entered the Herzogliches Georgianum seminary in Munich with his brother, then just known as Joseph, and was ordained alongside him in the Cathedral of Freising on 29 June 1951.

Msgr Ratzinger directed the choir in Traunstein for 30 years, becoming the kappelmeister (leader/conductor) of the cathedral choir of the Regensburg Cathedral, the ‘Regensburger Domspatzen’. This role led him to tour the world, conducting concerts and directing recordings for important labels.

In August 2008, Pope Benedict XVI spoke publicly about his brother when he was granted honorary citizenship by the mayor of Castel Gandolfo: “From the beginning of my life my brother has always been for me not only a companion, but also a trustworthy guide. For me he has been a point of orientation and of reference with the clarity and determination of his decisions. He has always shown me the path to take, even in difficult situations.”

Msgr Ratzinger likewise shared kind words about his brother in an interview shortly after: “My brother and I were both altar boys, we both served Mass. It was soon clear to us, first to me and then to him, that our life would be at the service of the Church … At Tittmoning, Joseph had received Confirmation from Cardinal Michael Faulhaber, the great Archbishop of Munich. He had been impressed, and said he, too, wanted to become a cardinal. But, only a few days after this encounter, seeing the painter who painted the walls of our house, he also said that when he grew up, he wanted to be a painter…”

Msgr Ratzinger also recalled his memories of the war, their father’s opposition to Nazism, and spoke about the love of music he and his brother shared: “In our house everyone loved music. Our father had a zither that he often played in the evening. We used to sing together. It was always an event for us. In Marktl am Inn, later, there was a music band that fascinated me. I always thought that music was one of the most beautiful things God created. My brother always loved music, too. Maybe I infected him.”

Msgr Georg was known to be a blunt man, even at times undiplomatic. Vatican News reports that he never hid the fact that “he did not rejoice at his brother’s election to the papacy in April 2005”, having said: “I must admit, I didn’t expect it, and was a bit disappointed … Given his heavy commitments, I understood that our relationship would be notably curtailed. In any case, behind the human decision of the cardinals, there is the will of God, and to this we must say ‘yes’.”

In an interview with a German magazine in 2011, Msgr Georg Ratzinger said: “If he could no longer carry out his duties from the point of view of his physical condition, my brother should have the courage to resign.” He was also among the first to know, well in advance, of Pope Benedict’s historic decision to step down as pope for reasons of age, to which he said, “Age makes itself felt … My brother desires more peace in old age.”