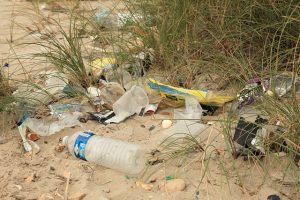 Waste plastic washed up on a beach (Pic by Rob Noble)

A variety of environmental groups gathered together outside the Dáil recently, to highlight the issue of the damage to the environment being caused by plastic.

As a Dáil committee heard expert testimony on the Waste Reduction Bill, members  of Voice of Irish Concern for the Environment (VOICE), Friends of the Earth, Zero Waste Ireland and Uplift, expressed their desire to ditch plastic.

The Green Party’s Waste Reduction Bill, seeks to ban plastic cups, plates, and cutlery and establish a deposit/refund scheme (DRS) for glass, plastic and aluminium drinks containers. “Such deposit schemes have been hugely successful in other countries and US States, increasing the collection of drinks containers up to 98%,” said Oisin Coghlan, Executive Director of Friends of the Earth.

Currently in Ireland, over 500,000 single use cups and 2.5 million bottles are being disposed of through landfill and incineration every day, and according to the Ellen MacArthur Foundation, 8 million tonnes of plastic leaks into the ocean each year, equivalent to one rubbish truck a minute dumping plastic into the marine environment.

Ultimately, that level of plastic pollution in the ocean leaks affects human beings too.“The resulting micro-fibres eventually enter the food chain. Seafood consumers ingest an average of 11,000 tiny pieces of plastic annually, and if current trends cannot be reversed this will increase dramatically over the coming decades,” wrote Joseph Curtin from UCC, a member of the government’s Climate Change Advisory Council in the Irish Times.

Eco Congregations Ireland supports the Waste Reduction Bill. “I think anything that helps recycling and the disposal of waste in a way that is not damaging the environment or to the human community is very good,” said Sister Catherine Brennan SSL from Eco Congregation Ireland. “I think there are cups coming on the market that can be recycled, but rather than having to recycle we should be cutting down on all these things because there is a huge issue with waste at present.”

Sister Catherine said people concentrate on the ‘human agenda’, “and we forget about the importance of the non human world – what Pope Francis speaks about so beautifully in Laudato Si.”

She also voiced support for the Conscious Cup campaign which aims to reduce and eventually eliminate single use cups in Ireland. The central focus points of the campaign is to encourage individuals to switch to a reusable cup and to persuade coffee shops to offer them a reward for doing so – either a monetary discount or extra loyalty points.  Hundreds of coffee shops around Ireland are subscribing to the campaign. The full list is available from https://consciouscup.ie. Chains offering discounts include: Butler’s Chocolate Cafe (10 c back on every cup), Costa Coffee (35c), Starbucks (35c), Insomnia (10c).

Meanwhile from the 12th-15th February, the board of the Global Catholic Climate Movement (GCCM) will be convening in Ireland. Taking advantage of this, a special meeting on Laudato Sí will be held in Maynooth on Thursday 15th February at 11am in the Columba Centre Library, Maynooth University South Campus, ending with Mass at 1pm celebrated by well known environmentalist, Fr. Sean McDonagh.