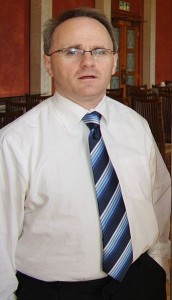 A member of the Northern Ireland Assembly has questioned whether some churches in West Tyrone need patrols in place during Mass following a spate of thefts from Mass-goers cars.

In the fourth separate report within a week, four cars were broken into during 8pm vigil Mass at St McCartan’s Church in Trillick last weekend.

Other thefts from cars parked outside churches in Aughnacloy, Carrickmore and Dromore have also been reported in recent weeks.

Sinn Féin MLA for West Tyrone Barry McElduff said he wanted the PSNI to state publicly if they know the identity of the gangs involved.

“It appears that they were trying to disable car alarms in Trillick, in the fourth incident at a chapel in Tyrone in a week. Do we have to set up some sort of community patrol in rural Tyrone while people are at Mass? I will also be asking Justice Minister David Ford an urgent question in the Assembly to see what he is doing to tackle this.”

Trillick parish priest Fr John McKenna told the Irish News that the thefts happened in his Kilskeery Road car park while he was actually issuing a warning in Mass.

He said, “During the Mass I told the parishioners about what had happened in Dromore. I asked them to make sure not to leave valuables and money in their cars,” he said.

The parish priest added, “People are disgusted that these individuals are going around taking advantage of the church.”

The windows of two cars were smashed and handbags stolen while parked at St Colmcille’s Church in Carrickmore during a school celebration Mass on Friday afternoon.

The previous Saturday evening evening, seven cars were broken into while they were parked in a church carpark on the Omagh Road in Dromore.

Another car was broken into at a church carpark on Main Street in Aughnacloy the same night.

The PSNI’s Fermanagh & Omagh District Commander, Superintendent Derek Scott, warned people that “nothing of value” should be kept in cars.

He added, “We are fully investigating and although these thefts may have been perpetrated by local criminals, there is a possibility that these could be the work of travelling criminals who travel through the area and target vehicles, still opportunistic in nature but in a more organised, purposeful fashion.”

“This highlights the need for people to report suspicious activity when they see it rather than waiting until we knock at their doors when making follow enquiries.”

He added that police recently wrote to some church leaders asking them to remind their congregations to be vigilant regarding thefts from vehicles.