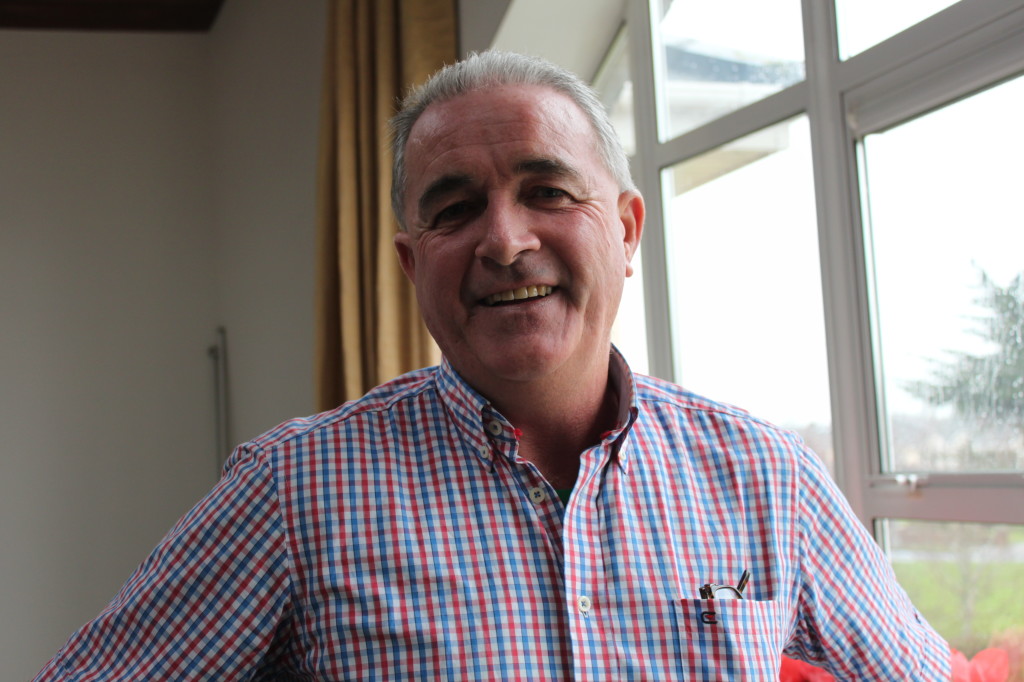 Fr John Skinnader CSSp who is missioned in South Sudan.

An Irish missionary priest who is working in the world’s newest and poorest nation took part in Saturday’s half marathon in Omagh to raise funds for the education of young people in South Sudan.

Spiritan missionary Fr John Skinnader is a native of Emyvale in north Monaghan.

He came home to Ireland two weeks ago to celebrate the marriage of his young cousin, Cathair Kerr, a brother of Ronan Kerr, the catholic member of the PSNI who was killed by dissident republicans in April 2011.

Fr Skinnader was the main celebrant at the funeral of the police constable who was killed by a car bomb at his home near Omagh; an atrocity which shocked all sides in Northern Ireland.

Ahead of the 59-year-old’s return to South Sudan on Monday, the Spiritan told CatholicIreland.net that where he is based there is no electricity, no paved roads, no running water and food is difficult to get.

“I am based near to one of the main towns called Rumbek in a place called Mapuordit, where I am running a youth training centre.”

“The diocese of Rumbek is the size of Switzerland and the brightest students from around the different parishes in the diocese are sent here because it has better security and we are giving better nutrition. With our solar system we are giving them lights to study at night.”

Though Mapuordit in Lakes State has not been caught up in the recent civil unrest which erupted elsewhere in South Sudan in recent months, many of those displaced by the violence fled to refugee camps in the area, including one close to the Irish man which is overflowing with 800,000 people.

South Sudan gained its independence from the north in 2011 after decades of war, which left millions dead and little infrastructure and no healthcare or education.

“I am there just a year and a half. Before that I was nine years in Ethiopia. Living in Ethiopia is like living in America compared to South Sudan,” he said.

The young men being trained in the Irish priest’s educational programme are all in their 20s and are trying to complete secondary school. “Because of the wars, education is very delayed in South Sudan,” he explained.

These are the lucky ones. “Most of them will be leaders in the future at national, regional or local level and some may go on to be church leaders a well,” he said.

“One of the big issues is revenge. A lot of the fighting stems from an attitude of an eye for an eye. We are trying to help them develop a better understanding of what Jesus’ message is.”

He feels he can understand the rivalry between the Dinka and Nuer tribes as an Irishman who grew up on the sidelines of the conflict in Northern Ireland.

But many young people don’t want any more war. “During the midnight mass which we celebrated in Rumbek one of the young people had a prayer: ‘We are the children of war – no more war’.”

According to Fr Skinnader, one of the areas the Church is focusing on is supporting the younger generation who want to change, education and development and who want to be connected to the wider world.

However, he highlights that this connection to the wider world does not always make itself felt in the way that might be best for the young.

“It is a strange situation. There is no newspaper, no television and practically no radio in the country – yet enterprising businessmen have brought in satellite dishes into a lot of the larger villages and the young people can see all the Premiership matches at the weekend.”

“So their life actually revolves around Premiership matches. They know all the United players, the Chelsea players but they know nothing really about what is happening in the rest of the world or what’s going on around them. And they have an image of life that is distorted because of the Premiership.”

What he finds very different to Ireland, where the churches cannot seem to attract young people, is the fact that in South Sudan “we have too many young people going to church. It is unbalanced!”

“Young people really want to be part of the Church. They want to see the Church as giving them the opportunity for education and for development and contact with the wider world.”

Another major issue he said is the treatment of women. “A good husband is one who beats his wife at least once a week,” and it is a major challenge to change that mentality.

“One of my cooks was off for a few weeks because her husband beat her so badly.” He believes this is an issue for those who might question why missionaries like him are there and tell him that as a European he is disturbing the culture.

“Generally we would see the sharing of the Gospel as sharing what is good in the culture and what they think needs to be changed – what would the Christian message add to what they want to change or how would it support the change.”

Meanwhile, girls as young as seventeen are often removed from school so as to be married off to men, often in their sixties, who are willing to pay a good cow price to secure their bride. One chief living near to the Monaghan priest in Mapuordit has 82 wives.

“We are trying to help people look at the good and bad things about their culture and change what needs to be changed,” he said.

Fr Skinnader was joined in the Omagh marathon on Saturday by other members of his extended family who ran not only for South Sudan but also to commemorate Ronan Kerr.

For more information or to support the work of Fr John Skinnader see: www.emyvale.net