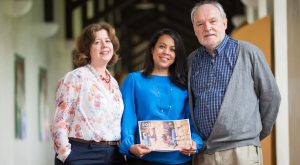 Last year was “monumental” for global development with the adoption of the Sustainable Development Goals, according to Misean Cara which has just launched its 2015 Annual Report.

In it, Misean Cara emphasises that nations’ actions today can change the future of the world.

“Successful achievement of the 17 goals and 169 targets will ensure that no one is left behind. Missionaries have always had the unique foresight and commitment to target the world’s most difficult challenges. It is no surprise that missionaries are central to the achievement of the goals,” said Heydi Foster, CEO of Misean Cara.

“The goals affirm the key role missionaries have to play, so watch this space there’s so much more to come,” she said. 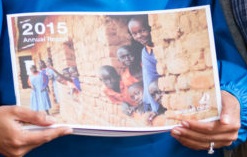 The launch of the Misean Cara 2015 Annual Report at its AGM in All Hallows College Dublin, was attended by over 120 missionaries from Ireland, the UK, Australia, Uganda, and Ethiopia.

The participants heard that last year 55 member organisations working in 53 countries helped over 2.5 million people through development projects focused on everything from education, to health, income generation and livelihoods and human rights.

“Our 2015 Annual Report clearly shows the pivotal role missionaries play in international development. Our members are part of a missionary movement that spans the globe regardless of borders,” said Heydi Foster.

She added that missionaries achieve so much on so little. “With so many difficult situations going on in our world today, never was there a more pressing need for the work of missionaries.”

Heydi Foster visited several of the missionary projects worldwide during 2015, and many of their representatives visited Misean Cara headquarters in Dublin.

She stated that during the aftermath of typhoon Haiyan in the Philippines, communities relied on missionaries for spiritual guidance in rebuilding their lives and for life-saving support like shelter, food and access to health care.

In February 2016, Misean Cara launched a research report: Faith and Resilience After Disaster. The Case of Typhoon Haiyan.

Results showed that people’s faith can be inextricably woven into their perceptions of resilience.

Resilience is not limited to material, technological and economic concerns, but also includes cultural and faith-based components.

Heydi Foster also drew attention to Zambia, where she saw the work of the Jesuit Centre for Theological Reflection led by Fr Leonard Chitti.

“I met Fr Leonard and I was impressed to see the reach of the Jesuit Centre’s advocacy work,” she said.

“It advocates for the political, social and economic rights of the people. The work of Fr Leonard and his colleagues has ensured local communities were part of the recent Constitution-making process in Zambia.”

While in Haiti she said she was moved when she saw the work of Sr Christiane Gervais from the Sisters of St Joseph of Cluny.

At the Rosalie Javouhey school many of the schoolgirls are ‘restavek’ or domestic servants living in the slums.

“I was astonished to see how the quality education provided by the sisters is opening up life opportunities for these girls,” she said. 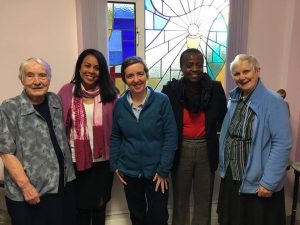 In March 2016, some of the sisters from Haiti visited Misean Cara in Dublin (see picture).

Srs Louis-Marie O’Connor, Rowena Galvin, and Eileen McGrath from the Sisters of St Joseph of Cluny updated the Misean Cara team on the Sainte Madeleine School in Mourne Cabrit in Haiti.

Heydi Foster, and Learning and Development Officer Colette Nkunda had attended the opening of the school in Haiti last year.

The school is supported by Misean Cara, and also receives support from the Digicel Foundation in a public – private partnership.

For many children in the area the school offers their first chance to go to school.