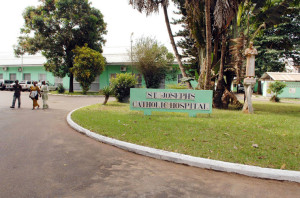 The Irish Hospitaller Order of St John of God is in shock following the death of a fourth missionary who worked at their Liberian hospital from Ebola.

Spanish missionary, Fr Miguel Pajares, who contracted the virus in the West African country, died in Madrid on Tuesday (12 August).

Fr Pajares was superior of the Brothers of St John of God and chaplain of St Joseph’s Catholic Hospital in Monrovia, the Liberian capital.

The 75-year-old priest had been repatriated to Spain for treatment last week.

He was reportedly the first European to be treated with the experimental drug ZMapp.

There is no news of Sr Juliana Bonoha Bohe (65) who was also evacuated to Spain having initially tested negative for Ebola and who was held in isolation at the same Spanish hospital as Fr Pajares.

Sr Chantal Pascaline of the Immaculate Conception died on Saturday (9 August) having assisted infected people with Fr Pajares. Sr Chantal was of Congolese nationality and had worked in St Joseph hospital as a nurse.

Also another nun from Guinea Equatorial, Sr Paciencia Melgar, is in critical condition at the same hospital where they all worked.

Br Patrick (52), who came from Cameroon, died on 2 August. He was particularly well known as he was the director at the hospital.

Misean Cara has reported that tributes have been made paid to Br Patrick who “dedicated his life and work to helping people”.

He was a missionary for more than 23 years and his fellow St John of God Brothers and hospital staff are “shocked” that he has joined the 1,000+ people in Liberia, Guinea, Sierra Leone and Nigeria who have lost their lives to the virus, Misean Cara stated.

“We have managed to keep Ebola at bay in our hospital for 10 days, and have totally avoided it in our Nursing School in Lunsar and our clinic in Lungi, which have largely been funded by Misean Cara,” Bro Peter Lansana Dawoh, a colleague of Br Patrick’s said.

Liberia is still recovering from its civil war from 1989-2003, with many buildings in the capital still in ruins and little or no social services in operation.

Despite these challenges, hope and resilience is strong amongst staff in the St Joseph’s Catholic Hospital.

“In both Liberia and Sierra Leone, the [St John of God Brothers] Order has survived civil war and other threats,” Bro Peter said. “We are confident that we will also conquer Ebola.”

St Joseph’s Catholic Hospital has received emergency funding of €15,000 from Misean Cara to prevent the spread of the virus to patients at the hospital.

This support has allowed the hospital to ready itself against the virus with the purchasing of protective overalls for staff; the setting up a semi-isolation room for patients awaiting test results; educating staff and patients on the Ebola virus; and training staff on care and managing Ebola victims.

St John of God Development Company in Ireland which raises funds for the order in 11 African countries has appealed to the Irish public for further donations to fund the fight against Ebola (See https://www.catholicireland.net/ebola-deaths/)

WHO said on Tuesday that it was ethical to offer untested ZMapp drugs to people infected by the virus.

The drug, produced by Mapp Biopharmaceutical in San Diego, has been tested on monkeys but had never been tried on humans until earlier this month, when two American missionaries were treated with it shortly before being evacuated from Liberia to Emory University Hospital in Atlanta.

One of the missionaries, Dr Kent Brantly, said in a message released by the Samaritan’s Purse charity “Every day I am stronger, and I thank God for his mercy as I fought against this terrible disease.”