Home > News > Ebola deaths on the rise in Africa

Ebola deaths on the rise in Africa 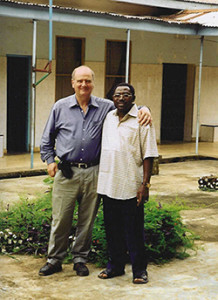 The St John of God community has appealed for funds to fight the ebola outbreak in which up to 1,000 people have died including some of St John of God brothers and staff who work in their hospitals.

The brothers have seen one community member die and two other brothers infected at their hospital in Monrovia, Liberia.

Last Saturday 2nd August Brother Patrick Nshamdze died having contracted the Ebola virus while caring for patients at the hospital where he was director. “Indeed a big tree has fallen causing the loss of a true hospitaller. May his soul rest in perfect peace,” said Br Peter Lansana Dawoh, a colleague and friend of Br Patrick.

John Mitchell of the St John of God Development Company, Ireland, which raises funds for 11 African countries, met the late Br Patrick on a recent visit to Liberia.

“The situation is very grim,” he told Catholicireland.net.  He said that the speed at which the virus strikes and its nature is ‘spectacular’.

“Ebola kills almost everybody, and it tends not to take too long. My friend Brother Patrick became ill on Wednesday and had died by Saturday.” Another colleague Fr Miguel Pajures who has been infected was evacuated by the Spanish government and is holding his own.

Br George Combey, another professional at the hospital, has also been infected.

Two nurses in the St John of God Lunsar hospital, Sierra Leone, have died. The situation is quiet as bad in this country but patients are staying away from the hospital.

The Irish St John of God Development Company has already sent €55,000 to help with the crisis and urgently needs more. “There are a lot of crises that money won’t help, but this it can help enormously,” said John Mitchell. “Funds go towards very practical items like protective clothing and equipment which needs to be replaced frequently. Also to provide security staff who perform the very vital task of stopping people from entering and leaving the hospital.”

Liberia and Sierra Leone, where the St John of God brothers have been present for 50 years, have come out of civil war so infrastructure and other societal structures are not robust. This adds to the difficulties in containing the virus. Previous outbreaks did not last too long, according to John Mitchell but because of its nature there is a stigma attached to ebola and people try to hide it.

“With TB in Ireland years ago there was a stigma attached. Now similarly people will not admit they have ebola. Also they go to these native healers and that is very dangerous,” said John Mitchell. He said that 100% of all donations will go to help fight ebola and save lives.

Yesterday (Friday) the World Health Organisation (WHO) declared the Ebola outbreak an international health emergency as the death toll was put at 1,000 people in west African countries. WHO stated that a coordinated international response is essential to stop and reverse the international spread of ebola. The states with ebola – Guinea, Liberia, Nigeria and Sierra Leone – should declare a national emergency according to WHO but there should be no general ban on international travel or trade. Details of how to donate and other information on Ebola on: www.sjogdonations.ie.