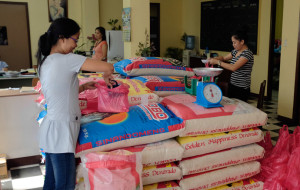 Misean Cara, the agency which supports the development work of missionaries, has announced funding for eight new projects involved in the Typhoon Haiyan relief efforts in the Philippines.

In all €120,000 has been approved for humanitarian projects which have been set up in response to the overwhelming needs in the wake of the typhoon.

In a statement issued on Wednesday, the organisation said it was channelling Irish tax payer’s money to support the humanitarian work of Irish missionaries in the Philippines.

With 5,260 people dead, 673,000 displaced, and 11.3 million people in need of food, Misean Cara said its members were re-focusing their efforts to isolated areas that have been untouched by general relief effort to ensure that supplies reach those who need them most.

Tacloban city and many towns on the islands of Samar and Leyte have been devastated, and the relief effort of many humanitarian organisations has largely been focused in these areas. There are, however, less accessible outlying areas that are not receiving help.

For this reason, the Divine Word Missionaries have decided to refocus their efforts on the Calamian Islands in the province of Palawan.

According to Fr Rodrigo F. Salazar SVD, missionaries from the order flew to Coron last week “to assess the relief operations. From the airport in Busuanga [a municipality in the province of Palawan], over a 40-minute land trip to Coron, “it was a terrible scene along the highway,” Fr Rodrigo recalled.

“Electrical posts were either flattened to the ground or broken into pieces forcing the wires to clatter with branches, and galvanised iron blown into pieces from roofless houses littered the ground.”

“In the St Augustine parish hall, which serves as the centre of operations, sacks of food packs were arranged into groups with labels indicating their beneficiary-communities,” according to Fr Rodrigo.

“There is a problem in distribution because affected communities are scattered in the islands. Furthermore, the present weather conditions with rough seas, has exposed the small boats to vulnerability with some taking 3 hours to reach the communities,” he said.

Working with local communities and their leaders to identify needs has been instrumental in helping missionaries re-direct their efforts to those who need them the most.

“After meetings with the local council, we realised that there will be no help in the near future for places like little Sitio Danawan and Fatima in Barangay Daanbantayan or Sitio San Antonio of Barangay Medellin,” Sr Anne Healy from the Sisters of the Sacred Heart of Jesus and Mary explained.

“For this reason our congregation, whose mission is placed in Cebu City, has now decided to provide humanitarian assistance in these areas and also to the 1,300 families who have been evacuated to temporary camps in Cebu City, one of which is adjacent to the Blessed Sacrament Parish where the Congregation is already working,” Sr Anne said.

In his blog on Wednesday, Mark Mitchell, Caritas Emergency Team Leader in the Philippines, said it “is a slow process getting the aid out to those that so urgently need it.”

“Challenges abound: blocked and damaged roads; the airport in Tacloban has been reduced to a shell but crammed full of local flights airlines and the heavy-lift C130 defence aircraft from around the world.”

He explained that as every fuel station he had passed was destroyed, it was leading to a shortage of fuel.

Catholic Relief Services (CRS) has been distributing hygiene kits and a new shipment of water supply materials had just been brought in from the port.

“These will be set up in the next couple of days and provide drinking water to another community,” Mark Mitchell explained.

“It’s difficult to imagine the magnitude of the disaster in the Philippines. The numbers of people affected become almost meaningless. Everyone has been affected to some degree,” he stated but added, “But when you look at individual faces, and you look through the tiredness, something remains – hope.”