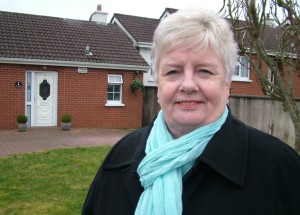 Marion Carroll, the woman cured instantly from multiple sclerosis in Knock in 1989, says her cure does not belong to her.

“Life gets pretty tough. We are so human that we need to see and touch and feel God’s love. It [My cure] is a special gift to people to let them know that God  is there,” she told CatholicIreland.net.

It is over twenty-five years since her cure, which Marion says came through the intercession of Our Lady, but was done by the “living Christ in the Eucharist”.

Marion’s health had always been frail. She married Jimmy Carroll in June 1972, became pregnant and her health deteriorated rapidly.

She was falling a lot. Doctors thought she had a slipped disk or a stroke. Finally, six years into her marriage came the devastating diagnosis: multiple sclerosis.

By 1989, she was completely paralysed, except for a little power in her left hand; blind in one eye and rapidly losing sight in the other; incontinent and finding it hard to swallow or talk.

“I was really just like a baby in a pram – I had to be washed, changed, fed and moved.”

Her husband Jimmy, an army man, cared for her at home. Theirs was a strong, unflinching love. “I’d married her ‘for better  or worse, for richer or poorer, in sickness and in health’….  That’s what it is about,” he says. 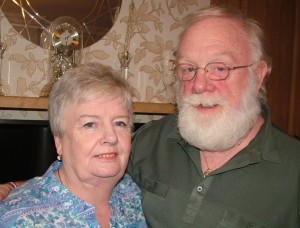 She was a deeply religious person but did not pray for a cure.

‘Everthing in life’ equated to the love of her husband and children, Anthony and Cora. She trusted God: “whether I lived or whether I died, He knew what was best.”

Travelling to the pilgrimage in September 1989, Marion was very ill with a kidney infection and people thought she had not long to live.

Strapped into a stretcher, Marion was placed before the statue of Our Lady at the front of the basilica in Knock. After Bishop Colm O’Reilly gave her holy communion, Marion felt sharp pains in both her heels.

When the pain passed, every pain in her body disappeared.

Shortly after, the bishop came and blessed Marion with the Monstrance. “He held it up and I got this beautiful feeling, a magnificent feeling, like a whispering breeze telling me that if the stretcher was open I could get up and walk.”

After Mass in a nearby care centre, Marion asked a nurse to open the stretcher. “When she opened the stretcher my two legs swung out and I stood up straight. I wasn’t even a bit stiff after all those years.”

Another friend noticed she was holding her head up without the collar and using her hands. Her speech was perfect.

Greater than the physical healing for Marion was the feeling she experienced. “It was like looking directly into the sun and the rays of the sun came towards me with all the gifts of joy, peace and great love.”

When Marion got home, Jimmy did not notice the change in his wife. He wheeled her into the sitting room and sat down.

“The wheelchair was in the centre of the room. I stood up and said ‘Look Jim, I can walk.’ He said ‘Oh Marie, what are you doing?’ I went over and I put my arms around him. I’ve never seen a man crying like that. He got down on his knees and he started thanking the Lord.”

Jimmy recalls the moment well. “I just couldn’t believe it. To see her standing there after such a long time. For a long time after that we thought we were dreaming, imagining it.”

She has never looked back physically or spiritually since that day, she says. For a year her cure remained under the radar.

She became a ‘handmaid’ at Knock, but word spread of her cure and soon she was invited to address groups in schools and parishes and she developed a ministry of healing.

Some believe they have been healed through her. She insists she cannot heal. “No one can heal only Jesus.  When I pray with someone I’m just giving out the prescription but He’s the doctor.”