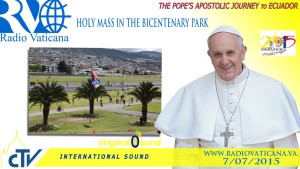 Pope Francis celebrated Mass for over one million pilgrims on Tuesday in Quito, the capital of Ecuador, and he also visited La Iglesia de San Francisco, the oldest Catholic religious house in Latin America.

In his homily at Quito’s Bicentennial Park on the second full day of his pastoral visit to Ecuador, the Pope called for unity among Christians, saying it is a necessity for the cause of evangelisation.

“Our unity can hardly shine forth if spiritual worldliness makes us feud among ourselves in a futile quest for power, prestige, pleasure, or economic security.”

The Mass incorporated readings in Quichua, the indigenous language of Ecuador, and the Pontiff wore vestments which bore a pattern of indigenous art.

In his homily, Francis urged Latin Americans to channel the same urgency that brought them independence from Spain two centuries ago into spreading the faith on a continent where Catholicism is losing souls to evangelical movements.

“There was no shortage of conviction or strength in that cry for freedom which arose a little more than 200 years ago,” Francis said. “But history tells us that it only made headway once personal differences were set aside.”

La Iglesia de San Francisco was founded in 1536 by the Friars Minor, and built over the course of nearly a century and a half, concluding in 1680.

At the main entrance to the church, Pope Francis was greeted by the mayor of Quito, Mauricio Rodas Espinel, who gave the Pontiff the keys to the city.

There, the Pope met political, economic, and civic leaders. In his address to them he warned that the goods of the earth are meant for everyone, and however much someone may parade their property, it has a social mortgage.

“In this way we move beyond purely economic justice, based on commerce, towards social justice, which upholds the fundamental human right to a dignified life.”

The tapping of natural resources, which are so abundant in Ecuador, must not be concerned with short-term benefits, he emphasised.

“As stewards of these riches which we have received, we have an obligation towards society as a whole and towards future generations. We cannot bequeath this heritage to them without proper care for the environment, without a sense of gratuitousness born of our contemplation of the created world.”

Referring to the presence of members of the indigenous peoples of the Equatorial Amazon, the Pope noted that this region is one of the “richest areas both in the number of species and in endemic, rare or less protected species…”

He said it required greater protection because of its “immense importance for the global ecosystem… it possesses an enormously complex biodiversity which is almost impossible to appreciate fully, yet when [such woodlands] are burned down or levelled for purposes of cultivation, within the space of a few years countless species are lost and the areas frequently become arid wastelands” (cf. Laudato Si’, 37-38).

In his address, Pope Francis said Ecuador – together with other countries bordering the Amazon – has an opportunity to become a teacher of integral ecology.

“We received this world as an inheritance from past generations, but also as a loan from future generations, to whom we will have to return it!”

The Pontiff highlighted that Ecuador, like many Latin American nations, is now experiencing profound social and cultural changes, new challenges which need to be faced by every sector of society.

Migration, overcrowded cities, consumerism, crises in the family, unemployment and pockets of poverty: “all these factors create uncertainty and tensions which threaten social harmony”, he said.

Laws and regulations, as well as social planning, need to aim at inclusion, create opportunities for dialogue and encounter, while leaving behind all forms of repression, excessive control or loss of freedom as painful past memories.

Hoping in a better future calls for offering real opportunities to people, especially young people, creating employment, and ensuring an economic growth which is shared by all (rather than simply existing on paper, in macroeconomic statistics), and promoting a sustainable development capable of generating a solid and cohesive social fabric.