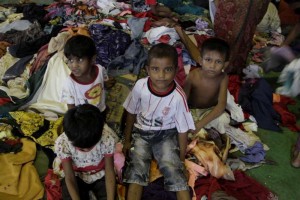 Pope Francis has voiced his concern and his suffering over the fate of the many refugees stranded at sea in the Bay of Bengal and the Andaman Sea.

Expressing his appreciation for the efforts made by those countries which “have shown their willingness to welcome these people who face great suffering and danger”, he urged the international community to offer humanitarian aid.

“Let us pray for the victims,” he said.

The Pope’s prayers on Sunday 24 May following the Regina Coeli, and those of other Church leaders, came as reports were emerging about the discovery of graves and trafficking sites in Malaysia.

Some 139 grave sites and 28 human-trafficking camps have been found in Malaysia and it is not known how many bodies are in each grave. The camps held anywhere between 20 and 300 people each.

Earlier in May, similar camps and graves were found across the border in Thailand which launched an offensive against smugglers. That was when they fled and abandoned hundreds of migrants in boats on the Asian seas.

After initially turning them away, Malaysia and Indonesia did accept them on the understanding that the immigrants would be settled elsewhere.

Agenzia Fides has published an appeal by Cardinal Charles Maung Bo, Archbishop of Yangon, who stated, “An agony of immense poignancy unfolds on the seas of South East Asia: a new wave of boat people, ejected by excruciating poverty and conflict from both Myanmar and Bangladesh are adrift in the seas.”

“Exploited by unscruplous human traffickers, men, women and children are huddled in unhealthy squalor ships, often sent to die in the seas. A new wound opens up. Let mercy and compassion flow like a river in the land of Buddha.”

The cardinal recalled the boat people of Vietnam.

“The boat people from Myanmar and Bangladesh are fleeing for dignity and security. In a great gesture of humanity, Malaysia, Philippines and Indonesia have opened their doors. The Myanmar government has rescued two boats that were adrift with refugees from Myanmar and Bangladesh. This gesture, coming from a nation worshiping the Lord of Compassion, Buddha is highly commendable.”

But he appealed for greater tolerance especially from the nations which both caused people to flee and which were reluctant to take them in.

The UNHCR has confirmed that the migrants/refugees on the Bay of Bengal and Andaman Sea include Rohingya people and others from Bangladesh and Myanmar.

It stated that vulnerable people around the world are moving in search of safety and dignity, fleeing persecution, abject poverty, deprivation, discrimination, and abuse. Such perilous journeys, whether by land, sea or air, have become a global phenomenon.

In the Bay of Bengal, migrants and refugees were fed only white rice and subjected to violence, including sexual violence.

On 20 May, the UNHCR issued a statement welcoming the commitment by Malaysia, Indonesia and Thailand to resolve the issue of the thousands of refugees and migrants stranded in boats in the Bay of Bengal and off the coast of Southeast Asia.

“This is an important initial step in the search for solutions to this issue, and vital for the purpose of saving lives. It is now urgent for people to be brought ashore without delay, and that immediate first aid and other care is provided for all who are in need,” the UNHCR stated.