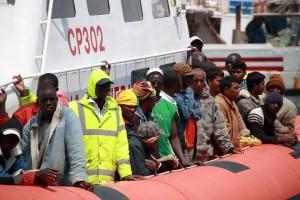 Pope Francis on Sunday prayed for the 71 migrants found in an abandoned truck on an Austrian highway.

Speaking to pilgrims gathered in St Peter’s Square for his Sunday Angelus the Pope said, “Unfortunately, in recent days many migrants have lost their lives in their terrible travels. For all these brothers and sisters, I pray and ask you to pray.”

He continued, “In particular, I join Cardinal Schönborn – who is here today – and the whole Church in Austria in prayer for the 71 people, including four children, found in a truck on the Vienna-Budapest highway. We entrust each of them to the mercy of God; and we ask Him to help us to work together effectively to prevent these crimes, which offend the entire human family.”

Cardinal Christoph Schönborn held a special service yesterday (31 August) in St Stephen’s Cathedral, Vienna, for the 59 men, eight women and four children who died, as well as all refugees who have perished.

Last week, the Cardinal told the Catholic Herald that he was “deeply shaken” by the deaths of migrants, and the “indescribable inhumanity” of those responsible for abandoning the truck.

Cardinal Schönborn said that it was a “terrible deed” which highlights the plight of refugees. He called for “courageous decisions” to be taken to help the many in similar situations.

He also urged Europe to be united, and to use the law to bring the “criminals” to justice. The leader of the Church in Austria asked every church in Vienna to ring its bells at 7pm on Monday for the asylum-seekers found in the truck.

Several people have been questioned in Hungary about the truck and are under suspicion of human trafficking. Austria has increased checks on trucks on its borders.

The statement came in response to the news from Austria, and also to reports that hundreds of migrants were missing and feared dead after two boats capsized on Thursday (27 Aug) off the coast of Libya on the same day.

Caritas stated that their death would have been avoided if a “common European safe and legal access pathway” were in place.

“Fortress Europe” is steadily transforming into “Undertaker Europe” stated the charity and called for an immediate implementation of a European refugee project based on “solidarity and defence of the dignity of every human being.”

Quoting Pope Francis, Caritas stated “we cannot allow the Mediterranean to become a vast cemetery”, and stated that the path between North Africa and Europe has been described as the “route of death” by refugees.

“The stench of the bodies of the men, women and children found in the truck in Austria impregnates all of us. This cannot continue this way. More controls, security measures and armed forces presence will not stop this. Europe needs to act on a humanitarian approach basis in Europe and in the affected countries,” said Jorge Nuño Mayer, Secretary General of Caritas Europa.

Marie Tempesta, Caritas Europa’s Asylum and Migration Officer said in an interview on Vatican Radio that only a few countries are shouldering the burden of the migrant crisis, something “totally not in accordance with the EU’s principle of solidarity.”

She said that the EU commission’s proposed 20,000 resettlement places were “not enough” and likewise that the response from EU members was “not enough” to tackle the crisis.

Caritas has called for:
• safe and open channels of legal entry to the EU;
• introducing a humanitarian visa, easily accessible and affordable, via embassies from countries of origin and transit;
• facilitating family reunification for refugees and migrants to join their families in the EU;
• implementing the interchangeability of embassies of different EU Member States to facilitate access in 3rd countries;
• extending the humanitarian admission programmes. engaging in more resettlement.