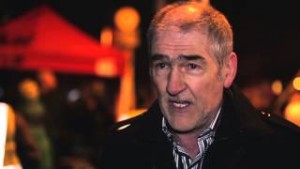 Mickey Harte has suggested that a return to the values of the 1950s and 1960s are needed in Ireland today.

The Tyrone football manager made his suggestion as he opened the Lenten programme ‘Journey Into Freedom’ for the parish of St John the Evangelist in the Dublin suburb of Ballinteer.

Recalling his own childhood in Tyrone in the ‘50s, he said “It was not a time of plenty, but it was spiritually rich.”

He recalled the various devotions that were followed in his home and the example his mother gave.

“She was a counsellor before that term was even heard of,” he said, “offering a listening ear to people with problems.”

He emphasised the need “to return to the personal touch, to return to the values of the ‘50s and ‘60s. Ask what can I do to help, not what’s in it for me, which seems to be the attitude in the rat race.”

“The problem with the rat race,” he quipped, “is that even if you win, you’re still a rat!”

In this era of modern technology, Harte said that: “it’s good to talk, but even better to listen. It’s a skill we have to learn for ourselves. We must become good listeners. People are missing the real presence of someone in front of them.”

Remarking on how many media pundits tend to emphasise the bad, he said: “We should seek the good in others. If we look for the good in each other we’ll find a lot more.”

Faith, he said, is about “building a relationship with God. We must engage with Him on an all-time basis. Faith needs nourishment, and growth challenges us. To have as strong a faith as we need is an ongoing project.

“We’re on a journey that goes on forever, and we must make the most of the gifts and talents God has given us.”

When it comes to leadership, Harte said, “We shouldn’t leave it to the priests. It’s not fashionable to be a Christian, but we need to share what we believe with others. We have to have a passion for our faith, otherwise we won’t be the best we can be.

“It’s a daily challenge to add growth to our faith life,” he said, “and the catalyst is prayer. We have to give time over to prayer, and change will come over us as we are tuned into God.”

He described the Rosary as “one of the best prayers”, and said of Eucharistic Adoration that “the more you go, the more you think: where did that hour go?”

The Lenten talks continue each Monday at 8pm in March, with Linda McCabe giving her personal story next Monday, followed by Moya Brennan of Clannad on 16 March, Fr Michael Hurley, parish priest of Aylesbury and Bohernabreena on 23 March, and Bridie Clancy and Dan Kelly of the Leixlip Cell Community on 30 March.