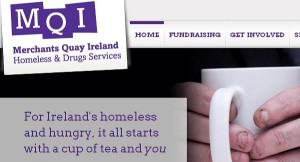 In 2012, Merchant’s Quay Ireland served in excess of 76,000 hot meals and treated over 3,000 drug users at its various centres throughout the country.

The charity is poised to serve 100,000 meals to Ireland’s homeless and hungry this year, despite the fact that statutory funding continues to significantly contract.

The information is revealed in MQI’s 2012 annual report which was launched on Friday by the Minister for Social Protection, Joan Burton, TD.

In his overview of the year, Chief Executive, Tony Geoghan said 2012 had “taught us that the issues of homelessness and drug use are not insurmountable and can be addressed with imagination, goodwill, humanity and a commitment to equality and social justice.”

But he added that this required a willingness and commitment on the part of the Government to engage strategically with the community and voluntary sectors to take care of the wellbeing of the most marginalised and vulnerable citizens by prioritising their needs and providing adequate resources to address them.

He highlighted that MQI had experienced a strong demand for its programmes in 2012. “Our Dublin based needle exchange service recorded 20,847 client visits, showing an increase of almost 2,000 visits from 2011,” he noted.

A total of 3,634 individuals accessed MQI’s needle exchange programme during 2012, of which 558 were new users of the service.

Tony Geoghan also warned that the spread of drug use outside of Dublin was an on-going trend detected by the charity with continued demand for its services at regional level.

In his summary of the year, Mick Price, Chairman of the Board of Directors, paid tribute to the role of the Franciscan Community whose “prescient vision made MQI possible.”

He added, “I want to express our gratitude to this community for its outstanding generosity, both material and spiritual, which continually supports and sustains our organisation.”

Five of the seven member of MQI’s board of directors are Franciscans, including the provincial, Rev Hugh McKenna OFM, who acts as Chairman.

Among the highlights for 2012, the annual report referred to the grand opening of the newly refurbished Riverbank Open Assess Day Services facility on Merchant’s Quay in the summer of 2012.

Other highlights included the relaunch of the newly refurbished Open Door Homeless and Drugs Centre in Athlone and the opening of a residential detoxification centre in Co Carlow with special facilities to help benzodiazepines (sleeping tablets and tranquilisers) withdrawal. Half of the patients at the centre are being treated for addiction to these drugs.

Outside Dublin, MQI’s Midlands Harm Reduction Outreach Service worked with an average of 130 clients a month in 2012, providing over 3,000 needle exchange interventions.

Acknowledging that Merchant’s Quay Ireland had experienced the impact of the economic recession, Tony Geoghan said this had been encountered through continued reductions in statutory funding for its services.

“Notwithstanding these cuts in funding, we have successfully managed to retain our core services,” he said.

Commenting on MQI’s ethos, he said it was committed to the vision that it “Believe in and cherish the value of every human being in keeping with our commitment to social justice coming from our origins in the Franciscan Tradition.”