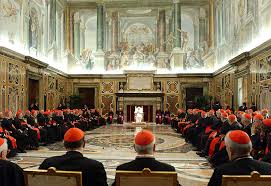 A ‘Voices of Faith’ speech in Rome by former President of Ireland Mary McAleese on International Women’s Day this week made worldwide headlines because of her candid description of how the Church recognises and treats women in its decision-making processes.

Before giving her speech, Ms McAleese, who has a Doctorate in Canon Law from the Gregorian University in Rome, described the arguments against the ordination of women as ‘codology’. In her speech she referred to the declaration by the Congregation for the Doctrine of the Faith in 1976 that stated that the Church does not consider herself authorised to admit women to priestly authorisation and said: “This has locked women out of any significant role in the Church’s leadership, doctrinal development and authority structure since these have historically been reserved to or filtered through ordained men.

“Yet in divine justice, the very fact of the permanent exclusion of women from priesthood, and all its consequential exclusions, should have provoked the Church hierarchy to find innovative and transparent ways of including women’s voices as of right and not in trickles of tokenism by tapping, in the divinely instituted College of Bishops and in the man-made entities such as the College of Cardinals, the Synod of Bishops and episcopal conferences, in all the places where the faith is shaped by decision and dogma and doctrine.”

And she was scornful of Pope Francis’s Synod on the Role of Women in the Church because it involved ‘350 male celibates’ advising the Pope on what women really want. “That is how ludicrous our Church has become,” she said. “How long can the hierarchy sustain the credibility of a God who wants things this way, who wants a Church where women are invisible and voiceless in Church leadership, legal and doctrinal discernment and decision-making?”

Ms McAleese’s speech was given additional media prominence by the fact that Cardinal Kevin Farrell, the Vatican’s Prefect of the Dicastery for Laity, Family and Life, banned her from giving the speech within the walls of the Vatican, despite the fact that the Vatican had hosted the Voices of Faith event since 2012.

The Church hierarchy simply cannot cope with the questioning voices of educated Catholic women, the former Irish president said. “The Church which regularly criticises the secular world for its failure to deliver on human rights has almost no culture of critiquing itself. It has a hostility to internal criticism which fosters blinkered servility and which borders on institutional idolatry.”

Speaking at the launch of a revised edition of Tomorrow’s Parish, a book by Donal Harrington, Archbishop Diarmuid Martin described President McAleese’s challenge to the internal culture of the Church as ‘brutally stark’. He said: “Some may find it unpleasant or unwelcome. I must accept the challenge with the humility of one who recognises her alienation.”

The Archbishop went on to say that, after the role of women, the second biggest challenge faced by the Church was the situation of young people. He said: “A survey of young people’s attitude to parish was carried out in the Dublin diocese as part of the preparation for the upcoming Synod of Bishops called by Pope Francis. The report was one of the most disappointing documents that I read since becoming Archbishop. Young people felt unwelcome in their parishes. I quote, without any comment, ‘A number of young people noted that it was people in parishes – priests and parishioners – who were the greatest obstacles for young people getting involved.’

“Where does the Church find itself in the midst of rapid cultural change in Ireland?” Dr Martin asked. “Faith involves a different way of living within any culture. What is involved is not a negative reaction or simple rejection of a changing world.

“In the past the Church and the Irish Church in particular was a highly moralising Church. Jesus did not write an arid rulebook as an inspiration for his followers. Jesus did not think that belief in him could be attained through imposition. Faith in Jesus is no ideology. It is about a faith which enables each individual to attain robust gospel wisdom, a freedom to renounce security for ourselves in order to live for others as Jesus did and then finding joy and fulfilment in living the Gospel.”