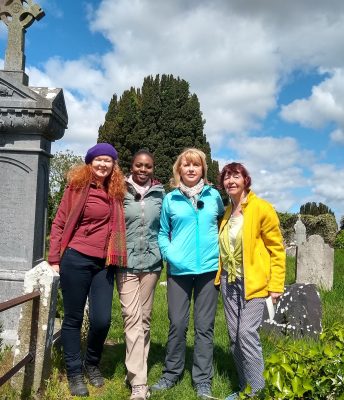 Ireland’s former President Mary McAleese is to share her experience of the Brigid’s Way Celtic Pilgrimage in the first episode of the RTÉ TV series All Walks of Life.

“She was adamant she wanted to do a walk of St Brigid,” Karen Ward told CatholicIreland.net. “Brigid is our female saint, a quintessential feisty woman who always found a way.”

The series is to air in the autumn and will feature pilgrim trails from all across Ireland – each done with an inspiring person on a different walk of life to Mary McAleese. Her guest on the Brigid’s Way Celtic Pilgrimage was a former refugee Debbie Somorin, who has lived in direct provision, studied finance in Dublin City University, and made a good life for herself in Ireland with her son who is ten years old.

“For RTÉ viewers, they know that there are wonderful people from around the world in direct provision and yet they have possibly never met someone from that walk of life. So it is a wonderful opportunity to meet someone who has been in direct provision to hear first-hand how it was for them, and how education opened so many doors,” said Karen Ward.

The walk began at the Upper Faughart Well by the graveyard, where the two pilgrims were met by Dolores Whelan and Karen Ward, co-rediscoverers of this ancient pilgrim path who have organised and accompanied groups on pilgrimage every year for the last seven years.

Karen Ward, speaking of Mary McAleese and her guest, said: “They really felt the essence of pilgrimage – that every step is a prayer, that it takes you deeper into yourself, and being out in nature.”

She added that the “gift” of pilgrimage is walking with somebody who could be a total stranger but having such a depth of conversation that a natural “baring of the soul” takes place. 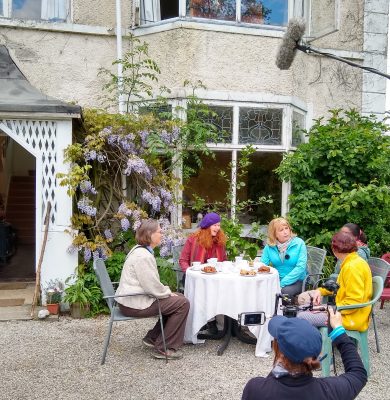 Filming for the programme

Mary McAleese has another connection to Faughart. She hails from Ardoyne in Belfast and has worked for peace and reconciliation in Northern Ireland along with her husband. When a call was made for the return of the bodies of those ‘disappeared’ (killed during the troubles and buried in unmarked graves), the body of Ardoyne man Eamon Molloy was left in Faughart’s ancient graveyard.

After leaving Faughart on this pilgrimage, she and her guest passed along by a stream associated not just with St Brigid but also with Cuchulainn and King Billy. All three and their followers felt that the waters of St Brigid’s stream had healing powers. Also, because the stream is part of an off-road stretch of the pilgrim path, it is particularly wild and natural.

Their walk also passed the Lisnawilly Demesne, where Sally Cox and her family have been hospitable to pilgrims from the start. The two experienced the traditional end of the first 9 km stage of St Brigid’s pilgrimage when people from the Louth Women’s Network provided the hospitality like St Brigid might have done, with a welcome spread for hungry, weary walkers

The Brigid’s Way Celtic Pilgrimage began 7 years ago and in 2015 became one of Ireland’s National Pilgrim Paths joining the routes associated with 12 male saints. Brigid’s Way, as it was initially called, was described as an “alignment” of ancient and sacred sites, as it intersects the Cygnus (Swan) constellation that was prominent in the skies at the time of Brigid’s birth in the 5th century AD.

The nine-day walking pilgrimage begins at Brigid’s birthplace in Faughart, Co. Louth and finishes in her monastic city, Kildare. It passes through the Lisnawilly Estate and through villages in Co. Louth, the farmlands of Co. Meath, Donadea Forest Park, Coolree Bog, the Grand Canal, Pollardstown Fen and the Curragh of Kildare. Along the route are sacred sites, including the Holy Well at Faughart; Knockbridge Standing Stone, also known as the ‘Cuchulainn Stone’; the Hill of Slane; the Hill of Tara; Brideswell Kilcock; and Brigid’s Fire Temple and Holy Wells, Kildare.

Earlier this year (2019) the organisers stated that that the Brigid’s Way route is established and they are taking a “fallow” year to plan for the future. This will involve working with others who organise the logistics, while Dolores Whelan and Karen Ward offer input on parts of the pilgrimage as required. An American tour company is to bring a group on the pilgrimage in 2020. There may also be involvement in an Irish-style Camino experience.

Meanwhile they suggest that people can walk some or all of this ancient Pilgrim Path on their own or with friends and family using the routes and maps on the Brigid’s Way website.