May God reward him & comfort all of you in your grief 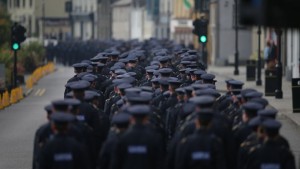 In a personal message to the grieving family of Anthony Golden, the Primate of All Ireland, Archbishop Eamon Martin, described the slain Garda as “a true guardian of the peace”.

During the State funeral at St Oliver Plunkett Church in Blackrock Co Louth, Dean Colum Curry, Vicar General of the Archdiocese of Armagh, delivered the message on the Primate’s behalf who is attending the Synod in Rome.

Archbishop Martin said he was with the mourners in thought and prayer as they gathered as a “Christian family, to comfort one another, to thank God for Tony’s goodness, and to honour his life”.

He said it was typical of the 36 year old father of three, “as a true guardian of the peace, to reach out so unselfishly to someone who needed his help”.

Addressing the chief mourners, Garda Golden’s wife, Nicola, and his children Lucy, Alex and Andrew, as well as his extended family, the Archbishop said, “I cannot imagine the terrible pain and loss that you are feeling these days. I’m thinking of Tony’s mother and father, sister and brothers. Nicola I am also thinking of your parents and sister, and all the members of your extended families.”

He added, “I know also that Tony’s colleagues in An Garda Síochana were like a family to him, and the communities of Omeath and Blackrock considered him as one of their own.”

The Primate concluded by praying, “May God reward him and comfort all of you in your grief.”

Flags on public buildings flew at half mast as a mark of respect while President Michael D Higgins and the Taoiseach Enda Kenny attended the funeral.

Over 4,000 Gardaí lined out along the streets of Blackrock as the funeral cortege made its way from the St Oliver’s to Garda Golden’s final resting place.

Fr Keenan highlighted that the young member of the Force was the 88th Garda to die in the line of duty.

“Garda Tony’s death once again reflects how north Louth and the Cooley Peninsula have been affected by the tragic history of the Troubles on the island of Ireland, and especially the murder of Detective Garda Adrian Donohoe, three years ago at Lordship Credit Union in Bellurgan,” Fr Keenan said.

The parish priest added, “There is no place for violence in our society, violence is wrong, always wrong.”