Mass at Holy Year Cross goes ahead despite vandalism 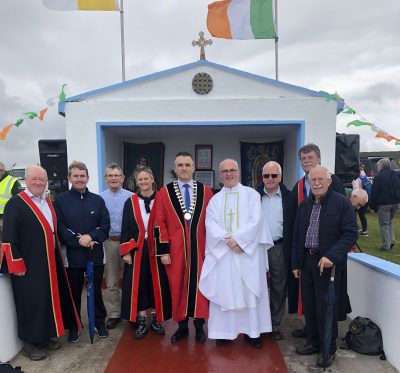 Mass went ahead at the Catholic oratory at Scrouthea Hill in the Comeragh mountains on Monday as it has done traditionally every August Bank Holiday since 1950, despite recent vandalism to the religious site and its cross.

Parish priest Fr Michael Toomey led the ceremony and told CatholicIreland.net that “All damage had been rectified.”

Gardaí are investigating the daubing of the small oratory and the Holy Year cross – both located on a hill overlooking the town of Clonmel – with racist swastikas.

The vandalism was discovered last Tuesday by members of a local committee who take care of the religious site at Scrouthea Hill when they arrived at the oratory to make preparations for the annual August Bank Holiday Mass.

According to volunteer Tony Cronin, the team was “shocked” to discover the Nazi swastikas had been spray-painted a number of times on the tiny religious structure.

The group set about painting the concrete walls to remove the swastikas.

He explained how the Bank Holiday Mass is a popular event in the local calendar.

“Depending on the weather, you can have anything from 400 up to 900 people attend the Mass. It is a tradition going on since 1950 when the Holy Year Cross was erected. It is a family event and a lot of people make a day out of it and have a picnic afterwards on the mountain,” Mr Cronin explained.

In his homily on Monday, Fr Toomey told those gathered for the ceremony that what had happened there the previous week was done by “some disturbed or troubled individual or individuals, who tried to cause hurt not just to people of faith, but to the whole town of Clonmel by their childish and grotesque actions”. 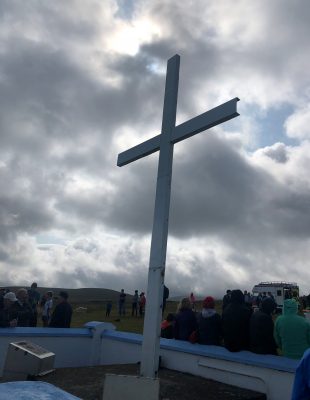 He added, “I do pray for them, and hope that whatever is troubling them, that they will find peace in the love and prayers of all of us.”

But the priest stressed that the faithful’s presence on Monday was “a much louder signal” to those responsible that “this is our town – this is our tradition”.

He also described the vandalism as “a form of persecution and evil”.

“We rejoice and are glad that through the wonderful work of our dedicated committee and volunteers who have done a fantastic job in maintaining and fixing the altar areas. We are here today to continue the tradition of 69 years ago, and every year since, when our predecessors climbed and stood here to celebrate the Mass which we do here today, in their memory and for ourselves, and for the glory of God.”

Fr Toomey also recalled how, as a child, he would come from London on holidays to the area and climb the mountain for Mass at the Cross on the August holiday weekend.

“For me, coming from London where we were lucky to see even a patch of grass – it’s was something so awesome – celebrating our faith – looking down and praying for our town.

“Little did I know then that one day I would have the privilege of actually saying the Mass for such wonderful people in our town who have climbed the mountain to celebrate Mass here today.”

Recalling that the Mass has been attended for 69 years by so many from the town and surrounding area who faithfully make the annual pilgrimage, Fr Toomey expressed gratitude to the committee from Old Bridge, Scouthea and other areas of Clonmel who have maintained the cross and shrine down the years.