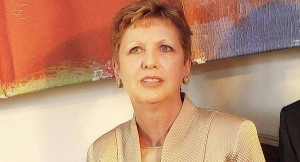 Former president of Ireland, Mary McAleese, has lashed out at the forthcoming synod on the family which is due to take place in Rome in October.

In comments on Monday afternoon, Dr McAleese warned that there is “something profoundly wrong and skewed” about asking “150 male celibates” to review the Catholic Church’s teaching on family life.

She made her comments during the ‘2014 Bloomsday Conversation’ at UCD, in a wide-ranging discussion with Professor Conor Gearty, Professor of Human Rights Law at LSE.

The two academics had both earlier been honoured by UCD. The former president was awarded the Ulysses medal, the university’s highest honour.

Elsewhere, the former head of state is reported to have said that Pope Francis had raised expectations of change but the odds of this happening were “very poor”.

She said other senior roles in the Vatican continued to be filled by men in a manner which lacked transparency.

“You don’t need a new theology of women, you just need to end the old boys’ club,” she said.

While Dr McAleese expressed the hope that the October synod would be “a process of real introspection and debate”, she said she had not yet moved “from hope to expectation”.

The Irish Times also reports that the former president said she had responded to the Vatican’s questionnaire on the family with a question: “How many of the men who will gather to advise you as Pope on the family have ever changed a baby’s nappy?”

“I regard that as a very, very serious question,” she said.