Mary McAleese stands by her trenchant criticisms of the Church 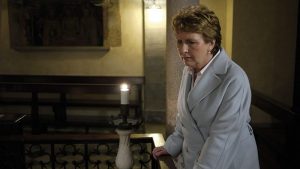 Former president of Ireland, Mary McAleese has defended the tone and her criticisms of the Church which she made in her recent address to the Voices of Faith conference in Rome.

In an interview with RTE’s Sean O’Rourke radio programme, Dr McAleese said the Church had a long culture of speaking out to the world but it didn’t have a culture of turning the spotlight on itself internally.

She said that this was what Pope John XXIII was trying to do with the Second Vatican Council. “But it is not part of the culture of the Church to turn a spotlight on itself.”

Of her trenchant criticisms, such as describing the Church “an empire of misogyny”, she reminded her interviewer that Pope Francis had himself used some feisty language in his criticisms of the curia.

“I am a Dominican girl, raised by the Dominicans, and my great hero is Catherine of Siena. If you think my language was tough, you should listen to hers – I didn’t ever go as far as calling bishops leprous vipers! That is the language of Catherine of Siena and if you really want feisty language read some of the stuff written by Francis himself.”

She also underlined that she “didn’t go to Rome to whisper”.

“My view is very simple; when we look at the Church’s culture, it really is time to not just talk from the moral authority of the pulpit of the world and castigate or chastise the secular world for all its failings, but to turn that spotlight back internally and say are we exemplars of good practice ourselves?”

She wanted to ask the church, if it was going to continue prohibiting women priests, then what strategy did it have to include women.

“My question is, if three popes in a row say that women cannot be priests, I have to accept that. If it is the case that all decision-making, all formation of catholic conscience, all formation of catholic doctrine is filtered through the priesthood – then my question to Pope Francis and indeed other popes before him is – accepting that women can’t be priests, how then do you propose to include them and their voices and their insights and their discernment and their opinions in decision-making in the Church while leaving the priesthood the way you want it?”

Ms McAleese said that the content of her speech to the annual Voices of Faith conference in Rome last week was similar to what she had said in a speech in Dublin in 1995.

Asked about her address and if she had alienated even some of her most ardent supporters, the former head of state responded that she was “trying to be factually accurate; that is my view – that the church has been a primary carrier of the virus of misogyny and also of homophobia and for generations of anti-semitism”.

She said she had a right and a duty to address these issues and to offer her opinion on matters that she believes are for the good of the church.

“I’m watching the church in my own country and elsewhere, particularly in the western world, lose influence and lose credibility precisely because of its attitude to women among other things.”

She added that she was not speaking as an ex-president. “I’m speaking as a Catholic, as a member of the church.”

Separately, Fr Brendan Hoban of the Association of Catholic Priests has said he has sensed a mixed reaction among the ACP’s membership to Dr McAleese’s address.

“The ACP is caught in the dilemma between putting a case very directly and robustly so as to make clear convincing arguments in support of a particular position (e.g. the role of women in the Church) and, on the other hand, putting it more gently and obliquely in an effort to engage support for it.”

THe Co Mayo-based parish pries said, “Mrs McAleese, in an effort to hold church leaders to account, has chosen the former approach which many of our members would support. Others, who would prefer a more nuanced, less confrontational approach regret the tone of her words.”

But, he stressed that “few would question the need to put the women’s issue at the heart of our concerns.”

Fr Hoban explained that the ACP position is that the Association supports the immediate ordination of women to the diaconate.

“But apart from that and the larger issue of ordination to the priesthood, the Church needs to find a credible and respectful way to include women in decision-making in our church.”

“The frustration and exasperation of women in our parishes is obvious to all and it will no longer be deflected by inaction, a patronising tokenism or a presumption of loyalty. The role of women is the key issue for the Irish Church, an issue that will become toxic unless it’s addressed. Mrs McAleese has brought it centre-stage in the Irish Church.”