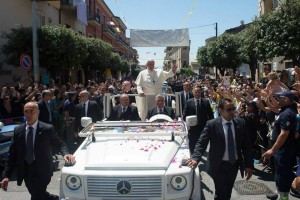 Pope Francis issued a very public denunciation of Italy’s mafia on Saturday warning them that they were excommunicated from the Church and rebuking them for their adoration of evil.

Speaking in Calabria, the heartland of the ‘Ndrangheta, the Pope spoke out about the mafia network’s “contempt for the common good.”

“Those who in their lives follow this path of evil, as mafiosi do, are not in communion with God. They are excommunicated,” the Pontiff said as pilgrims attending his Mass applauded.

While visiting Calabria, the 77-year-old Pope met relatives of Nicola “Coco” Campognolo, a three-year-old infant who was killed along with his grandfather and his grandfather’s girlfriend in January in an attack blamed on mafia drug turf wars.

The attackers torched the car with all three victims inside.

The boy’s parents and grandfather were part of a drugs trafficking clan of the ‘Ndrangheta.

The boy’s father and mother already were in jail at the time on drug trafficking charges. The pope expressed his horror following the atrocity and promised to visit the town.

Arriving Saturday morning by helicopter from Rome, Pope Francis spoke to 200 inmates in Castrovillari prison and comforted the imprisoned father of Nicola Campolongo in the courtyard of the prison.

He asked the pope to pray for the boy’s mother, who was permitted to leave prison following her son’s slaying and remains under house arrest. The Pope also met two of the boy’s grandmothers.

A Vatican spokesman, Fr Ciro Benedettini, said Pope Francis told the father: “It must never happen again that a child suffers in this way.”

Then the Pope headed to Cassano all’Jonio, the town where the killing of the little 3-year-old boy occurred, and which the Pope had promised to visit.

The Pope also highlighted the struggle of the region’s young people, who face high unemployment and temptation to join crime syndicates.

“Today, as bishop of Rome, I am here to confirm you not only in faith but also in charity, to accompany you and to encourage you in your journey with Jesus Charity,” he said.

“I want to express my support to the bishop, the priests and the deacons of this Church, and also of the Eparchy of Lungro, rich in its Greek-Byzantine tradition.”

But I extend it to all the pastors and faithful of the Church in Calabria, courageously committed to evangelisation and to promoting lifestyles and initiatives which put at the centre the needs of the poor.”

“And I also extend it to the civil authorities who seek to live political and administrative commitment for what it is—a service to the common good.

The Pope made his comments during the feast-day Mass he presided for Corpus Domini on the plains of the small town of Sibari, a once-important city in the Hellenistic period of Calabrian history.

Up to 200,000 faithful are believed to have attended the Mass which took place in temperatures of 30 Celsius.

The front row seats were reserved for those with illness and disability, rather than local dignitaries, acdecision the local bishop chose to underline ahead of the Pope’s trip.

The Pope’s visit to the region was greatly anticipated by the locals, who in recent months were shocked by the murder of Fr Lazzaro Longobardi, as well as the death of a three-year-old Nicola “Coco” Campognolo. 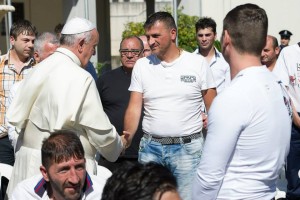 In his homily, the Pope spoke about the evils that can occur when adoration of God is replaced by adoration of money.

“Your land, which so beautiful, knows the signs of the consequences of this sin,” he told those assembled.

“This evil must be fought, must be expelled.” He called on the local Church to expend itself even more “so that good can prevail”.

“Our children ask this of us,” he added.

He said faith can help in responding to these demands. He called the faithful of the Church in Calabria to be brothers and to show each other practical solidarity, noting signs of hope in local families and in the Church.

He also urged young people not to allow themselves to be robbed of hope.

“Today,” he continued, “we ask the Lord to enlighten us and to convert us, so that we truly adore only him and we renounce evil in all its forms.”

He concluded, saying that in adoring Christ and following him, parishes will grow in faith and charity and they will be places where people walk alongside each other and support, help and love each other, even in difficult moments.

A 2013 study by Demoskopia, an economic and social research institute, estimated the ‘Ndrangheta’s annual turnover at some €53 billion in 30 countries, equivalent to about 3.5 percent of Italy’s total official economic output.

Around half of its revenues came through drug trafficking, the study found.

According to Reuters, Bishop Nunzio Galantino in Calabria is seen as one of the most progressive in Italy’s poorer, underdeveloped south and has taken strong stands against organised crime.

But there have been instances of collusion of some priests in other areas of Calabria where the ‘Ndrangheta is strongest, further south along the Italian peninsula near Reggio Calabria.