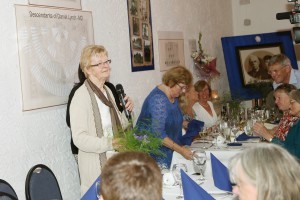 A Co Cork-born Bon Secours Sister who has been a constant presence in West Belfast during the Troubles is to leave the city this week after 34 years.

The departure of Sr Consilia Dennehy (79) will also mark the end of an era for the Congregation of the Bon Secours Sisters after 143 years of service to the city having arrived in Belfast from Paris in 1872.

When the Sisters first established themselves in Belfast they were involved in nursing care in the city and also the formation of the National Health Service in the North.

Sr Consilia arrived in Northern Ireland at the height of the hunger strikes in 1981.

Last year, the city’s Lord Mayor at the time, Cllr Máirtín Ó Muilleoir, presented Sr Consilia with the Belfast Ambassador Award “in recognition of your outstanding service and dedication working tirelessly for the whole community of Belfast”.

According to the 79-year-old, she sensed her vocation from the age of 11 but “ran away from it for 10 years” and became a trainee hotel manageress “falling in and out of love several times, dancing every night and almost becoming engaged”.

Before going to Belfast she saw healing as “attending to bodies in beds but I quickly expanded my understanding of healing to embrace body, mind and spirit”.

She was sent to Belfast by the Provincial of her order “as a contribution to justice and peace in Northern Ireland” with a brief to work in St Agnes’ parish where she ministered amid some of the worst horrors of the Troubles.

Speaking to the Irish News, Sr Consilia said she felt “great sadness” about her imminent departure, 34 years after she first began her work in the North.

“I have recognised that the time has come for me to leave Belfast and return to the Bon Secours community in Cork,” she said.

“I want to take the opportunity now to express my profound gratitude to the people of west Belfast and beyond for the welcome you gave me when I first arrived 34 years ago and all the friendships I have made in the many years since.”

“Little did I know what lay ahead of me in those dark days of 1981 when I first joined the parish team at St Agnes church.”

Sr Consilia said she had “experienced the privilege of ministering to the families of St Agnes, the prisoners in Long Kesh, and the families and catechists involved in Spred (special religious education with people with learning difficulties)”. She said in turn they had been “the presence of Christ for me.”

“My departure will mean the end of our ministry here. Of course, I feel great sadness but I also can celebrate the many signs of new growth and flourishing in this community and city,” she said.

Sr Consilia, who was born in the village of Ballinora, outside Cork city, will return to her homeland where her great grandaunt Mother Sulpice Hayes oversaw the establishment of the Bons Secours Hospital in Cork in 1915.

A Mass of thanksgiving for the 143 years of the Bons Secours in Belfast will take place at 10am this Monday morning at St Agnes Church in Belfast.