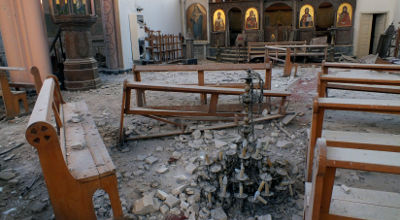 Christians in the Middle East and elsewhere are suffering “systematic killing and outright persecution”, according to Catholic peer Lord  David Alton of Liverpool.

Yet, the West’s response is to ignore it “without barely a murmur of protest” he lamented.

Highlighting worsening killing and kidnapping of Christians and arson attacks on their churches and homes in parts of Africa, the Middle East and other parts of Asia, Lord Alton said the West’s “indifference” was compounding the crisis.

The Crossbencher made his comments in an address given during a Lenten vigil service for persecuted Syrian Christians held in support of Aid to the Church in Need at the Immaculate Conception Church of the Jesuits, Farm Street, in London’s Mayfair.

The service began with a procession led by clergy holding images of two Jesuits in Syria, Fr Paulo Dall’Oglio, missing since last July, and Fr Frans van der Lugt, shot dead on Monday (7 April) in the Old City of Homs. 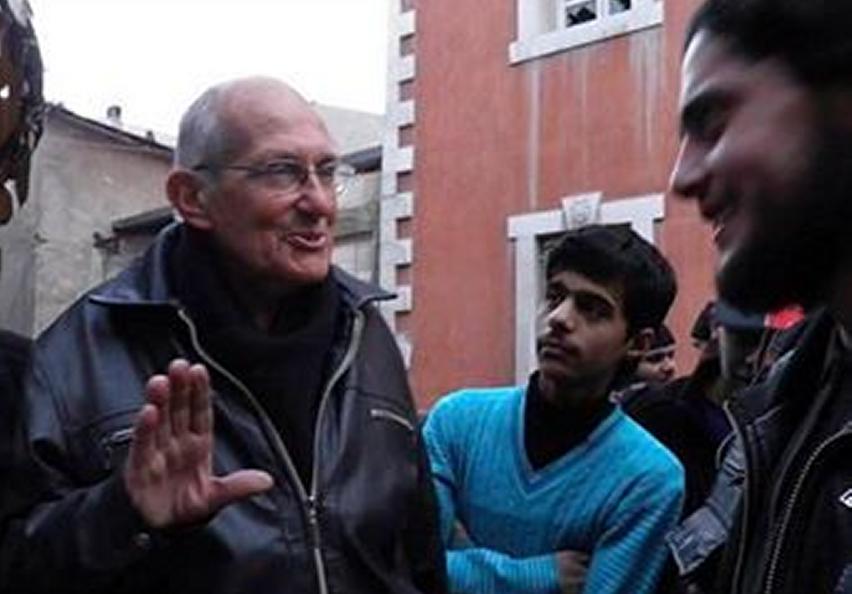 Lord Alton called on politicians including policy-makers, intelligence and other security organisations, ethnic minorities, Church leaders and faith groups in general to take action to tackle persecution of religious communities, especially Christians who, he said, suffer the most.

He also warned of disaster for the West if it fails to recognise the scale of the threat posed by violent and intolerant groups who, he said, had an increasingly global reach.

“I want to highlight the systematic killing and outright persecution of Christians which takes place without hardly a murmur of protest – and challenge the mistaken belief that somehow this has little or nothing to do with us.”

He continued, “Unless we lay bare the ideology which lies behind radical Islamist thinking and challenge the conspiracy of silence which surrounds the question of religious persecution, we will sleep-walk into a tragedy which has implications far beyond the ancient Biblical lands…”

Lord Alton’s speech came a day before British Prime Minister, David Cameron, highlighted the persecution of Christians during an Easter Reception for Christians at 10 Downing Street.

During the reception, attended by leaders of Christian organisations, including Neville Kyrke-Smith, National Director, of Aid to the Church in Need (UK) said that Mr Cameron had said: “It is the case that Christians are now the most persecuted religion around the world. We should stand up against persecution of Christians and other faith groups wherever and whenever we can.”

Mr Cameron’s comments come amid concerns that governments around the world are not doing enough to tackle the causes of religious persecution.

The vice-chairman of the All-Party Parliamentary Working Group for International Religious Freedom or Belief said: “Hundreds of parliamentary hours can be spent asserting the rights of foxes or on discussing rights associated with our lifestyles but when it comes to the killing of children, or the torching of their homes and places of worship, or the destruction of centuries-old culture, our political classes have taken Trappist vows.”

“This stems from a misplaced belief that their silence about radical Islamist groups represents ‘tolerance’. In reality, it stems from fear and indifference.”

Lord Alton highlighted the threat of Islamism for Christian communities, many of them with roots dating back millennia.

“While we [in the West] overlook and fail to understand the religious dimension to these terrible atrocities – and the imperative of harnessing thoughtful and moderate religious leaders from all traditions – we fail to end the persecution and the unspeakable violence.

“We in the West, who enjoy so many freedoms and liberties… ignore the systematic violent ideology of an Islamist ‘Final Solution’ directed at Christian minorities.”

And he called on Muslims in the West to speak out against persecution.

He said: “Muslims, who have often settled in our democracies, need to be much braver in breaking the conspiracy of silence and in identifying with those who suffer – among whom are many Muslim victims of visceral hatred by persecution for being the wrong kind of Muslims.”

Lord Alton was the keynote speaker at the service which was led by Father Dominic Robinson SJ, and included music by the Schola Cantorum of the London Oratory School, directed by Charles Cole.

Other speakers included Louise Zanre, director, Jesuit Refugee Service UK, and Patricia Hatton and John Pontifex, both from Aid to the Church in Need.

The event raised more than £3,300 for Aid to the Church in Need’s work for Syria, which includes emergency and pastoral support for refugees and displaced people.