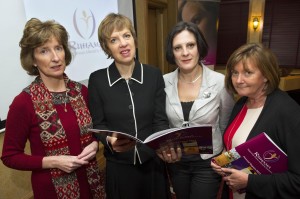 Last year saw an 18% increase in the number of women in prostitution accessing the services of Ruhama according to new figures released on Wednesday.

The agency’s 2013 Annual Report revealed that 305 women were given direct support and assistance by the agency through a comprehensive range of services.

This year, Ruhama is marking 25 years since its foundation in autumn 1989.

Some 2,500 women in prostitution in Ireland have been assisted over that time.

The initial service offered by Ruhama, which was founded by the Good Shepherd Sisters and Our Lady of Charity Sisters, was a street outreach to women involved in street-based prostitution.

This service remains an important aspect of Ruhama’s work today; in 2013, 70 women in street-based prostitution received assistance through the ‘Ruhama Outreach Van’.

However, the sex trade in Ireland has changed considerably over the years and is increasingly located indoors and populated by women trafficked into Ireland.

83 of the women in Ruhama’s casework last year were trafficked for the purpose of prostitution and this represents a 17% increase on 2012.

Speaking at the Alexander Hotel in Dublin, the Labour Senator said the agency offered “support, options and choices to many of those 2,500 women – choices that were not apparent when they embarked on prostitution”.

She said it was very clear from reading Ruhama’s report that “prostitution in Ireland has become highly organised and highly profitable for those who organise it and highly exploitative of the mainly women and young girls who are engaged in prostitution”.

Senator Bacik described the current law on prostitution, the 1993 Act, as “a deeply flawed model” and warned that it had resulted in the conviction mainly of the women working in prostitution.

As a member of the Oireachtas Justice Committee, she said there was an alternative model which they had looked at in Sweden, which “targets demand rather than supply”.

“It decriminalises those who sell sex but it criminalises the purchaser and in so doing it seeks to tackle and reduce demand,” she explained.

This model, which was introduced in Sweden in 1999, had resulted in a reduced demand for prostitution and a reduction in the trafficking of women into Sweden for the sex trade.

“It has become a less attractive destination for traffickers because of this targeting of demand,” Senator Bacik explained.

She added, “We were not persuaded that liberalisation of prostitution as we have seen in the Netherlands and elsewhere has been effective in reducing exploitation and reducing harm or tackling supply and demand.” 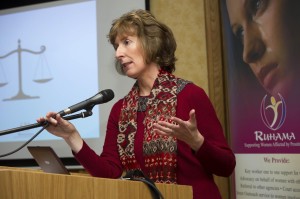 According to Sarah Benson of Ruhama, trafficking is very closely linked with prostitution.

Since 2008, when the anti-human trafficking legislation was established in Ireland, Ruhama has worked to implement the act and raise awareness around the issues.

EUROSTAT has estimated that there are nearly 10,000 suspected victims of trafficking across Europe in a single year.

She said poverty was a factor in some women entering prostitution and cited the habitual residency condition which precluded women from outside the EU accessing supports such as rent allowance.

She also called for an all-island approach to the issue and said the recent passing of Lord Morrow’s bill by the Northern Ireland Assembly was a significant development for Ireland.

Speaking to CatholicIreland.net, Gerardine Rowley said the good thing about legislation such as that being adopted by Northern Ireland is that women in prostitution now have no fear about coming forward to the police to discuss concerns about their situation.

“We work with a lot of women from Nigeria. They have been brought here for the purposes of prostitution. We try to support these women and a lot of them want to exit prostitution but a lot of them are controlled by criminals.”

“Some women have status to stay here but the habitual residency condition is a real block – we have found that often women find themselves going back into prostitution because they have no financial supports.”

Speaking of the increase in the number of women involved in prostitution in Ireland from Brazil, Gerardine Rowley said many of them were coming from situations of dire poverty and that they found themselves in prostitution for financial reasons.

“Some of them are coerced and exploited by criminal gangs who control them here,” she explained.

She said criminal gangs operating in Ireland were luring women from Brazil and elsewhere with the promise to the women that they were going to be models or that they could make thousands for one month in the sex trade in Ireland.

But when the women got here they are ‘controlled’ and the money they get is very little so they end up being forced to stay in prostitution longer in order to pay off their debts.

“The backdrop behind a lot of the women who find themselves in the Irish sex trade, whether they are Irish or non Irish are situations of vulnerability – sometimes it is poverty, sometimes it’s other issues like abuse. The danger is that there are people there who are willing to exploit that vulnerability – the pimps and the traffickers…”