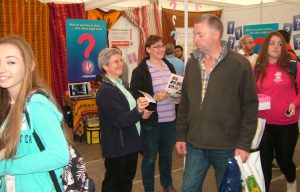 Missionary Sisters, Servants of the Holy Spirit at IMU stand at previous ploughing.

While some religious groups who were regular attenders at the National Ploughing Championships will not be present this year, others will keep the faith flag flying.

The Legion of Mary, the Franciscans, the Daughters of Charity,  St Joseph of Cluny Sisters, EWTN and Trócaire will all have stands at Europe’s largest outdoor exhibition and agricultural trade show which takes place this year from 20 to 22 September 2016 at Screggan, Tullamore.

The Church of Ireland diocese of Kildare and Meath and the Methodist Church will also have exhibition stands however this year the Catholic diocese of Meath, Vocations Ireland, the Irish Missionary Union, the Jesuits  and other orders who normally attend, will be giving the exhibition a miss.

Sr Peggy McLoughlin, who worked for many years in  the United States before returning to work in Ireland, will be present at the stand of the Sisters of St Joseph of Cluny at the Ploughing.

“It is a way of making ourselves known,” she told CatholicIreland.net. She has been attending the championships for eight years. “You get lovely reactions from people and we meet a lot of past pupils or people who are related to our sisters.”

It is a witness to your faith and belief, she says. 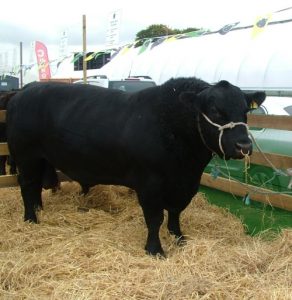 “I think it is important to be present,” says Br Pat Lynch, Vocations Director of the Franciscans who have also attended the Ploughing for years.

Last year the order moved to the retail section of the exhibition to ensure a greater footfall. They ended up beside a stand promoting a new whiskey.

At the stand they distribute free prayer cards and back copies of their bi-monthly magazine ‘St Anthony Brief’.

The Franciscan Vocations Director does not expect to pick up vocations through the Ploughing – that is not the point, he says. “We are sowing seeds and we never know where our prayer cards and magazines may go.”

“We are wearing our habits and are visible. I think it is good for religious to be there as a witness to  others.”

Last year a number of the Franciscan students were present at their stand for a day and they are hoping to do the same this year.