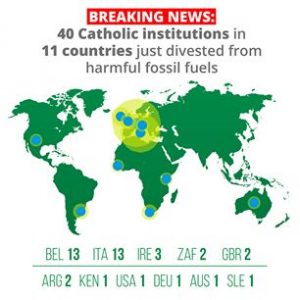 The Union of Presentation Sisters is among 40 institutions which have agreed to collaborate in the largest-ever joint divestment from fossil fuels. This means they will they will no longer invest in companies which are involved in extracting or producing fossil fuels.

For a number of years the Union, including the Presentation Sisters North East Province and South West Unit in Ireland, has been aligning investments with projects that reflect its member’s values and commitment to caring for human rights and the community of life.

Their Ethical Investment Policy is an expression of the commitment that over the next five years, or sooner, they will divest from any company whose primary business is the extraction, production and/or distribution of fossil fuel or uranium, or who is responsible for environmental degradation and from making any future investment in any such company.

“We further commit ourselves to exploring how our investments can promote sustainable solutions to the current climate change crisis,” stated Sr Mary Deane (Congregational Leader, Union of Sisters of the Presentation of the Blessed Virgin Mary).

This is largest joint announcement of divestment by Catholic organisations to date.  The institutions are located across five continents, and represent  , church hierarchical bodies, financial institutions and holy sites. Their decision to withdraw financial support for fossil fuels is based on both their shared value of environmental protection, and the financial wisdom of preparing for a carbon-neutral economy.

In Assisi, Italy, the home of St. Francis and a deeply significant place for the world’s 1.2 billion Catholics, three institutions and a municipal government have divested. These include Sacro Convento, a monastery complex and holy site that houses the remains of St. Francis, from whom Pope Francis took his name, and which is the spiritual home of the world’s Franciscan brothers.

The diocese of Assisi-Nocera Umbra-Gualdo Tadino has also divested, which includes more than 80,000 members and the pilgrimage town of Assisi; as well as the Seraphic Institute, a religious medical centre that provides care for disabled children.  The mayor of the town of Assisi has also announced its divestment from fossil fuels.

Sr Sheila Kinsey, a leader in the Wheaton Franciscan Sisters and Executive Co-Secretary of the  Justice, Peace and Integrity of Creation Commission (JPIC) of the International Union of Superiors General (USG-UISG) in Rome has described their experience stating, “When the Wheaton Franciscan Sisters divested from fossil fuels in May, we were overjoyed that eight sister organisations joined us.  To see that number more than quadrupled just five months later is truly astounding.  The movement for divestment is growing every day, and people of faith are in the lead.”

Many other church entities around the world are stepping away from fossil fuels. The Catholic Church’s policy arm the Episcopal Conference of Belgium has become the first Catholic episcopal conference in the world to divest. In South Africa, the Catholic Archdiocese of Cape Town has invested in social and ethical funds. Within the Church hierarchy there, a total of one episcopal conference, one archdiocese, three dioceses, and a vicariate have divested.

These spiritual leaders are joined by business leaders. Two financial institutions have announced their divestment. Germany’s Bank für Kirche und Caritas eG (Bank for the Church and Caritas) is one of the first Catholic banks in the world to divest from fossil fuels.  The bank, which has a balance sheet of €4.5 billion, is breaking from coal, tar sands oil, and oil shale. 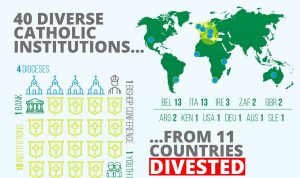 Worldwide to date, the total value of those institutions that have committed to divest surpasses $5 trillion.

“The moral clarity of these 40 divesting institutions is cause for celebration,” said Tomás Insua, the Executive Director of Global Catholic Climate Movement, a major convener of this divestment announcement. “Their leadership blazes a path that the World Bank and its fellow financial bodies should follow. As the World Bank meets in Washington, D.C., we hope its leaders notice that the movement for a fossil-free world has grown vastly stronger.”

The Global Catholic Climate Movement is a community of hundreds of thousands of Catholics, and a global network of member organisations responding to Pope Francis’ call to action in the Laudato Si’ encyclical.