Home > News > Laity’s role in evangelisation needs to be recognised

Laity’s role in evangelisation needs to be recognised 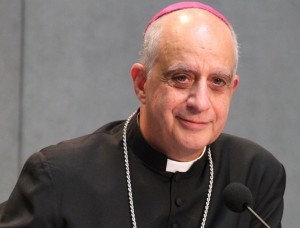 Archbishop Rino Fisichella, President Pontifical Council for the Promotion of the New Evangelization

The new evangelisation is brought about not just by priests but by all the baptised the President of the Pontifical Council for the Promotion of the New Evangelisation has said.

Archbishop Rino Fisichella said this fact should be recognised in a concrete way by the Church.

Answering a question on the clustering of parishes in Ireland and the future shortage of priests, Archbishop Fisichella told CatholicIreland.net that it was not just in Ireland that this process was taking place.

But he believed there was a great participation of people and young people in the Irish Church and this gave him hope.

Referring to the international meeting on the New Evangelisation which took place this week in the Vatican, drawing together 2,000 people from 60 countries, he noted there was a good number of people from the UK and Ireland.

“That is a consolation,” he said. The Archbishop continued, “The new evangelisation is not made just by priests. It is made by all the baptised. Probably we should be able to recognise in a concrete way the support and work  of people, especially women [in parishes].”

If we had no women, he said, we should have to close all our parishes because they are the ones who are most present in catechesis and helping. Lay people are already present and working in the new evangelisation.

“Then there is such a richness of global movements with a new style of life. The Church is often not aware  of them but they are present. How can we give concrete, official recognition for that?” he asked.

Earlier Archbishop Fisichella met twenty-four bishops from the Congo who were making their ad limina visit to meet the Pope.

In the Congo, said Archbishop Fisichella, there were just 500 priests and 80,000 catechists.

“The transmission of the faith is made by catechists not by the priests or the bishop but by lay people. The Church needs to recognise officially that they are the Church in this region, they do everything.”

Asked by another journalist about the regions the Pontifical Council for the New Evangelisation was most concerned about, Archbishop Fisichella said they were concerned first of all “for the most secularised parts of the world: Europe, North America, Australia and parts of Latin America.”

Archbishop Fisichella was addressing journalists in Rome on the topic, “A deeper look into the Magisterium of Pope Francis”.