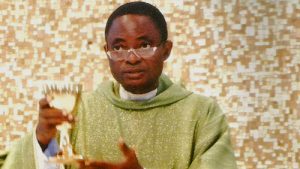 Christian Solidarity Worldwide (CSW) has learned that Fr John Adeyi, whose decomposing body was found on 23 June in Benue State, may have died because he could not access his medication. He had been abducted on 24 April.

Fr Adeyi, vicar general of St Bernard’s Catholic Diocese of Otukpa in Benue State, was seized by armed men near Odoba village along the Otukpa-Enugu Road.

According to local press reports, he was returning home after having successfully mediated between parishioners and the Odoba parish priest at the request of the Catholic Bishop of Otukpa.

His decaying remains were subsequently dumped by his kidnappers behind the Otukpa Secretariat in Ogbadibo Local Government Area (LGA) and were discovered on 23 June.

Fr Adeyi was the most senior priest in the Catholic Diocese of Otukpa and had recently celebrated 25 years in the priesthood.

A severe asthmatic, he is thought to have died because he was unable to access his medication.

In a comment to the Nigerian paper Sunday Vanguard, his mother, Mama Martha Kate Adeyi said, “Fr John had no problems with anybody, he served God and humanity with all his being, soul, spirit and body. He didn’t deserve the treatment they meted to him as a servant of God. I am heartbroken, devastated, but God knows why it happened this way.”

“I thank everyone who showed concern about his abduction and eventual death. I’m only pleading with government and law enforcement agencies to do justice in this matter by ensuring the arrest of the masterminds of this unfortunate incident. It is only then that Fr John will find peace and the family will also be consoled.”

In a statement, Governor Ortom described Fr Adeyi as a peace-loving man of God, and assured his family that his administration would ensure that the perpetrators would be found and brought to justice.

According to local media reports on 28 June, the Benue Police Command has arrested one suspect in connection with the case and is continuing its search for others.

CSW’s Chief Executive Mervyn Thomas said, “We extend our deepest condolences to the family of Fr Adeyi and the Oktupa Diocese. It is both sad and reprehensible that clergymen, who dedicate their lives to serving for no financial gain, are being targeted for kidnapping and extortion.”

“Fr Adeyi is the second clergyman in central Nigeria to be found in this manner. On 30 March, the decomposing body of Rev Iliya Anto was discovered in Kaduna State, nine days after he and two other clergymen had been abducted.”

“Such kidnappings seem to indicate a worrying breakdown in law and order. While we commend the Benue State authorities for the progress made so far in tracking down culprits, we also urge the Nigerian authorities to formulate and implement a comprehensive security solution to the kidnapping phenomenon, which is increasingly affecting citizens throughout the country.”