Home > Featured > “Knock has touched me in a special way.”

“Knock has touched me in a special way.” 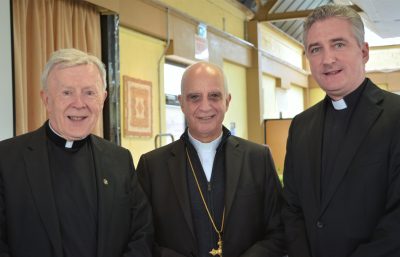 The President of the Pontifical Council for the Promotion of the New Evangelization has said he was particularly moved by the apparition which occurred in Knock 140 years.

Archbishop Rino Fisichella noted that there was no oral message on that rainy evening of 21st August 1879; but that the apparition itself was the message.

Archbishop Fisichella, who is based in the Vatican, was the keynote speaker for the Feast of the Assumption as part of this year’s annual novena.

This year marks the 140th anniversary of the apparition which was witnessed by 15 people, aged between six and 75. They saw a silent vision of Our Lady, St Joseph and St John the Evangelist, as well as the Lamb of God, standing on the altar surrounded by angels.

In his homily on Thursday, the Italian prelate presented his interpretation of the apparition underlining the faith of Mary, the hope of St Joseph, the love of St John and “the sign of the Risen Jesus triumphant over death”.

“An apparition always remains a very extraordinary moment in the life of the Church,” he told Catholicireland.net. “I think that each apparition should be taken in its own context and its own complexity.”

“I think that the request of silence, especially within this culture and era of chat, is extremely important. This is the era from many perspectives of emptiness.

“We need to help people today, especially people who don’t know the profound value of silence, to understand better the value of silence. The request of silence is a special spirituality for the New Evangelization.”

In his address to a seminar earlier on Thursday on the theme “Mary in the life of the Church”, Archbishop Fisichella, who taught fundamental theology for 20 years at the Pontifical Gregorian University and also served as an Auxiliary Bishop of Rome, explained that the New Evangelisation is an “attempt to renew our mentality, our culture and our sensibility to share our encounter with God”.

“Did you encounter Christ personally in your life? If you did, please don’t forget to share the joy of this encounter. If you don’t, it’s probably because you didn’t truly encounter God in your life, because once you have encountered God in your life you cannot stay neutral.”

Of Mary, Archbishop Fisichella said reading in the original Greek the Gospel of St Luke, who is the interpreter of the true sense of the Marian spirituality, the text of the Annunciation uses a verb which we translate as the Angel Gabriel appearing to Mary.

“But the verb is more accurately translated as he knocked on the door; he asked the permission to enter into her life. How important is this in Knock? God knocks to the door of all life. God goes against our free will – never. He wants you to open the door of your life like Mary. She opened the door and for this reason Gabriel entered her life and asked, ‘Do you want to be the mother of God?’