Knock concert to be streamed live on Pope’s channel 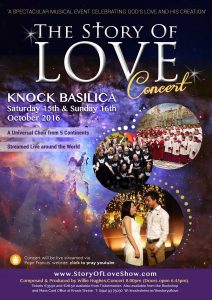 A global audience will watch the forthcoming concert titled ‘The Story of Love’ which has been composed by Dubliner Willie Hughes and will be broadcast on Saturday and Sunday 15-16 October.

The concert will be streamed live on Pope Francis’s recently launched Prayer app.

The Pope’s video for the month of October, featuring his prayer intention, will also be screened as part of the concert.

Following on from the successful performances at Farmleigh House and Dublin Castle, ‘The Story of Love’ concert will be staged at the recently refurbished Knock basilica in Co Mayo.

The concert brings together a production team of top Irish professionals including Niamh White, the former director of the Late Late Show, Mark Cahill music producer for Fr Liam Lawton, Fiona Cunningham Production Designer for the Voice of Ireland and Luis Peveda from Riverdance.

The concert itself is a four-part love story of love, loss, forgiveness and reconciliation told through songs composed by Willie Hughes and performed by Italian singers.

Speaking about the musical, Willie Hughes said, “It is great to have such talented singers to perform your compositions. They are young Italians who sing in English but with the hallmark of the wonderful passion we readily associate with the Italians.”

He added that “The aim of the concert is to celebrate the interconnectedness and interdependence of humanity, planet earth and the divine. And to promote inclusiveness in a world increasingly dominated by negative patterns of exclusion.”

The opening sequence of the musical is a screen presentation of creation, along with the Sistine Chapel Choir.

Screenings feature throughout the concert, which ends with a Massive Universal Choir of Love made up of choirs from around the world including the Sistine Chapel in Rome, St Patrick’s Cathedral Choir in New York, the Metropolitan Cathedral Choir Mexico City, Choirs from Hiroshima, Manila, Melbourne and many more countries.

In a groundbreaking finale, they will all link up by video to sing ‘We Believe: It is all Above Love.’