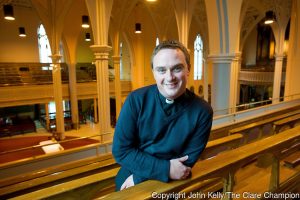 A Killaloe priest who was ordained in the past five years has refuted recent claims about the National Seminary in Maynooth.

Speaking to the Limerick Leader newspaper, Fr Ger Fitzgerald (36) who was ordained in 2011, has defended Maynooth from allegations of “homosexuality and misconduct”.

Fr Fitzgerald said that St Patrick’s College had been portrayed as a “golden house of debauchery, sin and squalor”.

He added, “In my time this was not the case. No parties were had and there were no drinks in rooms. This simply did not happen during my time there.”

Castleconnell native Fr Fitzgerald who is curate in the Cathedral Parish in Ennis said he felt he “should say something considering the recent storm that appears to have engulfed my old alma mater. To have an image of Maynooth as a replica of a Christmas party in ‘The Wolf of Wall Street’ is an inaccurate representation.”

He added, “As students in my time we were all there with a purpose in mind. We all wanted to be close to God because we love God and were trying, in our own fledged way, to serve him in his church.”

“This is why I have such an issue with what is happening currently. The church that I love with all my heart is once again taking a battering. This goes further than just the institution of Maynooth College. This strikes again right to the heart of the church in Ireland.”

Fr Fitzgerald also stated, “I cannot speak for any other student, perhaps even less so for the students who are there now. I must also say that even just one case of abuse be that verbal, physical, sexual or in any form is one case too many and should be investigated rigorously.”

“As for the experiences I have read in the papers of formation meetings becoming something which could be included in the 13 enhanced interrogation tactics used by the CIA, this categorically was most certainly not my experience.”

He added that it was now time for all parties to come together to “openly discuss the colleges future”.