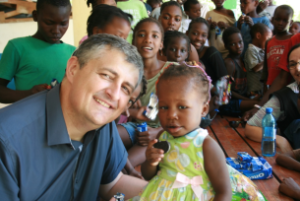 Thousands of women will take to the streets of Dublin and Cork on Monday to fundraise for charity.

In Dublin, as many as 40,000 women will take part in the VHI mini-marathon while the Cork City Marathon is set to attract more than 9,000 competitors, many of them women.

These events are crucial fundraising events for scores of charities.

One parish from Newbridge Co Kildare has over 40 women members running to raise funds for Haiti’s ‘Restavek’ children.

These are children who, as a result of poverty, have been given away into domestic service. The name Restavek is a slur word for worthless.

The Irish parish sends funds twice a year to Haiti to pay the fees of teachers who teach Restavek children.

Their support for people in Haiti began when church leader, Elizabeth Booth, watched the 2010 earthquake unfold on television from Ireland and was moved at how people praised God that they were still alive when they were pulled from the rubble.

Restavek children face a life of domestic servitude and a range of other abuses due to their lack of education which keeps them trapped and vulnerable all their lives.

The project is in its fourth year now, while Tearfund has been working in Haiti for decades.

“Education is a big part of what we do. Post the earthquake, there was a lot of rebuilding of houses and restoring livelihoods but this is a project that the people in Open Arms Church are connected to and they do lots of fundraising for – from Thai curry nights to the mini marathon.”

Another event which Tearfund Ireland is promoting takes place on 21 June – mid-summer’s day and Father’s Day.

“I’m for the Fatherless” is an event providing an opportunity for people to help children on Father’s Day who aren’t lucky enough to have a father, according to Niamh Daly.

2014 was a devastating year for children worldwide. Countless children were orphaned by the Ebola virus, the brutal conflict in Iraq, Syria and other places, as well as natural disasters.

“It is about mobilising men around the country to engage in fundraising and put themselves in the picture of global relief and development. You see a lot of women doing coffee mornings or mini marathons and dads are a really important part as well.”

“This is an event on Father’s Day targeted at fathers to get them to come out and do a walk with their families and say ‘I’m for the fatherless’.”

So far, 25 churches around the country have got behind the initiative and are organising walks in their areas for the afternoon of 21 June.

The well known musician and radio presenter, Ronan Johnston, is project manager for ‘I’m for the fatherless’ and he can be contacted by any group wishing to host a walk. Individuals can also check out Tearfund Ireland’s Facebook page and see where there is a walk near them.