Kildare and Leighlin to welcome first of many priests from Romania

The diocese of Kildare and Leighlin is to welcome its first Romanian priest on 29 August as part of a drive to stem the decline in priest numbers.

Fr Eugen Dragos Tamas, from the Iasi Diocese of Romania, is to work in the parish of Tinryland in Co. Carlow.

During his homily at Mass in the parish on Sunday 20 August, Bishop Denis Nulty made the announcement and said: “I’m going to ask you the people of Tinryland to welcome Fr Eugen Dragos Tamas, to make him feel at home here and take him to your hearts as one of your own.”

For his initial weeks in Ireland he will stay in Carlow to settle into Irish life and pastoral practice, before going to Tinryland. The Bishop stated that his arrival marks another step in the “larger diocesan conversation” around priest numbers and parish appointments.

In recent weeks he visited the Diocese of Iasi in Romania to explore how the Diocese of Kildare and Leighlin might support projects there in exchange for priests coming to minister in Ireland. He said he received a “very swift response” with details of the arrival of the first priest.

He hopes that a second Romanian priest will come to work in the diocese in the coming months. He will also live in the Presbytery at Tinryland, which Bishop Nulty said will become “a beacon for the diocese in this current conversation about the new pastoral reality that is unfolding all around us.”

Fr Eugen Dragos is 28 years old and was ordained a priest in June 2015. His interests are I.T. and computers, and Bishop Nulty expressed the hope that Tinryland has a good wifi connection. 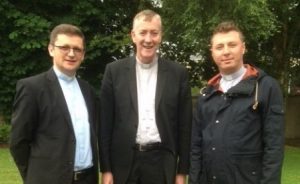 Fr Claudiu, Bishop Nulty and Fr Laurentiu in Ireland for the summer

Earlier this summer Bishop Denis Nulty welcomed Fr Laurentiu and Fr Claudiu from the Diocese of Iasi in Romania to Kildare and Leighlin for the summer months. Fr Claudio went to Tullow and Fr Laurence to Clonmore. Both priests also spent some time in Ireland in 2016.

Last summer (see catholicireland.net 18 July 2016), Bishop Denis Nulty welcomed three Indian Carmelites to take charge of the busy White Abbey Friary in Kildare. The two priests and one brother are members of the Indian Carmelite Province and are to stay in Kildare for three years.

Kildare and Leighlin has had other priests from abroad serve in the diocese in recent years. Fr George Augustine, who is a native of Kerala, India, is currently working in the diocese. A Benedictine father, he visited Ireland for a placement from Rome in 2011 and stayed. He was in Portlaoise parish first and then moved to Kilcock.