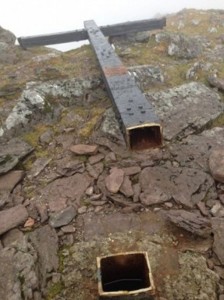 Vandalised cross at top of Carrauntoohil

Bishop Ray Browne has expressed the sadness of the people of Kerry after a cross on the summit of Ireland’s highest mountain, Carrauntoohil, was felled at the weekend.

“There is a feeling of sadness and upset among the local people and hill-walkers and mountain-climbers at the cutting down of the Cross at the summit of Carrauntoohil,” he wrote in a statement on the vandalism to the important local landmark.

The people of the surrounding parishes have a great fondness for this Cross, he said, and I can feel their sadness and great upset.

The five metre high steel cross was assembled on the mountain top using welding machinery in 1976.

The event was televised at the time.

According to local Independent TD, Michael Healy Rae, it took 100 people to put it up.

Prior to the steel cross, the summit was marked with a wooden cross for many years.

“We do not know why anyone would do this and no reason has been given,” said Bishop Browne.

A commemorative plaque explaining the origins of the cross has also been stolen.

The felled cross was discovered by a group of climbers early on Saturday morning (22 November). It is believed an angle-grinder was used to chop it down.

Kerry county councillor John Joe Culloty (FF) said the cutting of the cross was a further step in the move towards “a Godless society”. He said he would do “all in his power” to have it reinstated.

Local people are said to be upset at the vandalising of the iconic landmark which had been freshly painted in September.

“People will recall the happy and positive picture in the local press of a ladder up against the Cross and a man sitting on the arm of the Cross painting,” wrote Bishop Browne.

He said the Cross was a symbol of love – the love of God for the world and the whole human family. 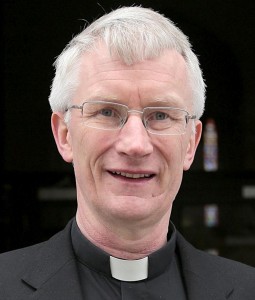 “The Cross always proclaims: God is Love; Love one another as I have loved you. My hope is that love will come to the surface in people’s reaction to this happening.”

He continued, “Beaufort Community Council have already announced their intention to re-erect the Cross. Energy to restore the Cross rather than bitterness and anger is the Christian way forward.”

However, Atheist Ireland has said that if the mountain is a public space, the cross should not be there “as it is a symbol that does not represent the whole community”.

The group is already in dispute with Kerry County Council over the erection of a crucifix in the council chamber.

A spokesman for the group, Peter Hinchliffe, said Atheist Ireland will meet the council again in December to discuss the matter but is prepared to contest it in court if necessary.

Meanwhile, meetings are being held this week to decide how to replace the cross.

Tim Moriarty of Beaufort Community Council said his group had been inundated with offers of help from the local area and elsewhere.

Speaking to the local radio station, Bishop Browne said the Church too would “lend a hand” in the restoration effort.