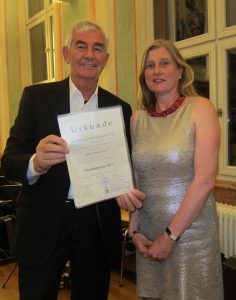 Irish missionary Fr Shay Cullen has warned that the grave situation in the Philippines has resulted in as many as 8,000 state-sanctioned executions in less than a year.

He revealed his concerns about the Philippines in his acceptance speech at a ceremony in the Catholic University of Eichstätt-Ingolstadt in Germany, where he was presented with the A.K. Shalom Award for Human Rights.

Making the presentation, Ulrike Schurr, Chairperson of the Justice and Peace Group at the university said, “The award is richly deserved because of the international impact of the work of the Preda Foundation and Fr Shay Cullen.”

In his address the Columban priest pulled no punches as he stated, “Today in the Philippines, we have a grave situation where the values represented by this award are needed more than ever.”

The state-sanctioned executions of people suspected of being drug users or dealers have reached a high of about 8,000 since 30 June 2016. “The killing goes on as I speak to you tonight,” he explained.

He appealed to his listeners to take a stand against these violations and for the value of life, the due process of law and the principle that all are innocent until proven guilty.

“Otherwise not only are more suspects vulnerable but we are all vulnerable if death squads are allowed to have their murderous way. In the past, inaction and fear allowed tyrants to rule nations by the gun and violence,” he warned.

“This is a lack of awareness of and the lack of a commitment to defend human rights. The suspects are mostly poor street people and have not been formally accused or found guilty of any crime at the time they are murdered. The death squads and police are supported and encouraged by the administration to kill the ‘suspects’. Anyone can be branded as a ‘suspect’ and killed.”

Elsewhere he warned that “It is the end of a civilised country if the rule of law and due process are ignored and the judicial system, faulty as it is, bypassed. Education on the constitutional rights to life, freedom, and respect is more vital than ever to save the dignity of the people.

“Silence is consent in the face of human rights abuse. We have to take a stand for human dignity and speak out for life and against death. This award is a message to the Philippines and the world that life is precious, the rights of the person must be upheld and protected, and the victims must be helped.”

Ulrike Thoenniges, President of the Tatort-Verein Foundation based in Cologne, lauded the important work of Preda and Fr Shay and his team in defending human rights in the Philippines. She said the extraordinary work for the past 43 years has been consistent and unrelenting in commitment and dedication.

“It is very important work that is an inspiration to the world and greatly deserves the Shalom Award. It is a work that is on-going and consists of rescuing children illegally detained in jails and saving victims of human trafficking. The children are rescued from sex predators and sex tourists and their abusers. The work gives the children shelter and healing therapy and reintegration,” she said.

Fr Cullen said the award was a recognition that human rights defenders who are working for justice and peace are also victims of those who would vilify and act against them in their work and to damage their reputations.

“We applaud those on the Shalom awarding committee who stand with us in solidarity. The award is a statement that all life is precious, that every person, no matter whose life it is, is of great value and each has invaluable dignity and every one is worth saving. This is the spirit and the value which this award upholds,” he said.

“It is a message to the world. It is a statement that human rights are of greatest importance and that the lives of the excluded people and the poorest of the poor are of immense worth and that they have a right by their humanity to receive help and support in times of need and danger.”

He added that these are the values within the work of the Preda Foundation by which the staff and social workers work every day to rescue those abused in jails and brothels, and to help abused and exploited children, rescuing them and bringing them to freedom and safety, free from the power of their abusers, the jailers and the death squads.

“We are called to be champions for them, to be a voice for them, and give them a chance for a new life whether they are in the Philippines, in Syria, or in Germany. Our values are universal and are for all people. In this world we live but a short time, we are all one, and we have the strength and the spirit to act as one in making this a better world today and for the next generation. Thank you for honouring them with this award.”

Next week, Fr Cullen is due to visit Ireland and will address TDs and Senators in Leinster House.

He will return to the Philippines via Germany, where he will address a Fair Trade conference and deliver a speech at the German Catholic Bishops’ Conference.