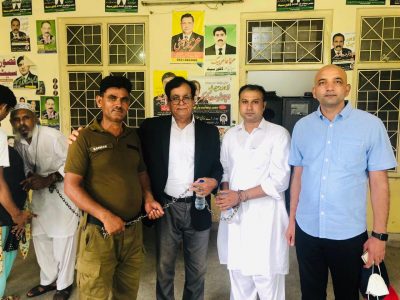 Catholic charity Aid to the Church in Need (ACN) reports that, according to a human rights activist, judges in Pakistan are afraid to acquit Christians falsely accused of blasphemy due to threats from extremists. This comes after yet another death sentence has been handed out, this time to 37-year-old husband and father, Asif Pervaiz.

Sajid Christopher Paul, president and executive director of Human Friends Organisation (HFO), spoke to ACN after Mr Pervaiz’s death sentence was handed down in the Lahore sessions court on Tuesday 8 September: “The judges in the low courts do not have as much security as the High Court and the Supreme Court. I am not saying the judges themselves say they are insecure but the lawyers and everyone involved in cases such as this say that they don’t have the same security so they don’t make the bold decisions. The Supreme Court can make daring decisions like the acquittal of Asia Bibi because they have high-level security.”

Christian man Asif Pervaiz was arrested in October 2013 when it was alleged he sent blasphemous text messages to a work colleague, Muhammad Saeed Khokhar. Mr Pervaiz is being charged under the blasphemy laws of 295A, 295B and 295C in the Pakistan Penal Code. However, Mr Pervaiz says that his SIM card was stolen before the texts were sent and that he has been set up by Mr Khokhar because of his refusal to convert to Islam.

The (Catholic) National Commission for Justice and Peace in Pakistan found that in the last 30 years there were 232 Christian victims of the blasphemy laws, accounting for 15 per cent of cases, despite Christians representing less than 1.5 per cent of the population.

Mr Christopher said that Mr Pervaiz’s wife and young children are inconsolable and that his children have missed vital time with their father as they grow up: “The oldest child is about 10 years old. The children miss their father a lot. When his wife visits him they ask, ‘Why isn’t he here? Why can’t we see him?’ He’s been in prison for seven years and they haven’t been able to spend time with him. His youngest twins were born when he was arrested and he hasn’t held them in his lap or his arms.”