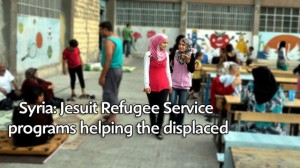 The Jesuit Refugee Service Syria is this year’s recipient of the Pax Christi International Peace Award.

The announcement was made at St Joseph’s church in Sarajevo on Sunday evening as part of the Sarajevo 2014 Peace Event which took place throughout the city at the weekend.

The ceremony was celebrated by Pax Christi international, those who attended the Sarajevo Peace Event, and people from the local community.

It centred around performances by the Pontanima choir, which received the award three year ago for its work to bring reconciliation to Sarajevo and the region as a whole.

The choir is an interreligious, intercultural one which performs for a ‘symphony of religions and cultures’.

Jesuit Refugee Service began working in the Middle East and North Africa in 2008 in response to the large number of displaced people in the region due to conflict.

In 2011, JRS Syria began to focus on providing support for those in their own country who were suffering due to the violence. They now provide support to over 300,000 Syrians.

They work to accompany, serve and defend the rights of the poor in Syria by providing food, hygiene essentials, basic healthcare, shelter management and rent support.

They also work to provide educational and psychosocial support to almost 10,000 women and children.

JRS Syria has been recognised for its interfaith work. They provide support to everyone and anyone, be they Muslim, Christian, rebel or pro-Assad.

Their team is made up of people of different nationalities, culture and religions also. JRS Syria is striving to promote the rejection of the logic of war, of the perversion of religions to turn people against one another and the spread of fear of the ‘other’.

The work of JRS Syria is helping vulnerable people across Syria survive despite the violence that surrounds them.

Their message is that we all should open our doors to one another, foster respect and love in our communities, and realise that we can live together, we do not need to be afraid of one another.