The legacy of Saint John Paul the Great was very much in evidence again at Knock Shrine this week when more than 350 young people received awards named after the beloved pontiff.

The Pope John Paul II Awards were launched in the Archdiocese of Tuam in 2006 and are aimed at encouraging young people to become more involved in their parishes and in the life of their community. Participation in the scheme, which is sponsored by the Knights of St Columbanus, is open to those aged between 16 and 18, typically students in fifth or sixth year of secondary school. 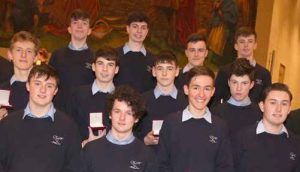 The award is non-competitive, flexible and voluntary, but it requires an ongoing commitment from those involved in parish life and social awareness activities – at least one hour a week over eight, 14 or 20 weeks, depending on whether the young person is working towards a bronze, silver or gold JPII award.

Examples of parish involvement include reading at mass, becoming an altar server or a Eucharistic minister, joining a choir or a folk group, composing prayers of the faithful or writing articles for the parish bulletin. Social awareness activities could involve, for example, joining the Society of St Vincent de Paul, working in a youth club, regular visitation to residential homes or becoming a Faith Friend.

At this year’s awards ceremony in Knock on Thursday 17 November, Archbishop Michael Neary of Tuam commended this year’s 352 award winners and told them that as a result of their endeavour they had acquired a deeper insight into the people who form the Church in their local areas.

“You know more about their work, how they think, pray, and fulfil their responsibilities as individuals, families, and members of society,” the archbishop said. “In this way you have grown closer to Jesus Christ as the One who inspires those people and has influenced yourself.

“The relationship works two ways. People have got to know you better, are influenced by what you are doing and the spirit in which you do it. You will notice from your experience that both yourselves and others work as a team, that team spirit is very important.

“You have been challenged to give of your time, talents, intellect, and skills as you took an active part in the life of the Church. As a result you have grown in your appreciation and understanding of Church. There is undoubtedly great idealism and generosity, but this needs to be challenged, and when challenged it thrives as it is in the John Paul II awards. 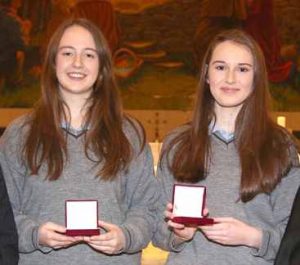 JPII Award winners from the Presentation College in Headford.

“I commend you all on your achievement. You have had the opportunity to reflect more deeply on your faith and have the courage to bear witness to it in situations involving your peers. It is my fervent hope that you will go forward from here to bring joy and hope to the life of the Church in your local parish area and beyond.”

It is fitting that these awards are named after Saint John Paul the Great. As pope, it was he who launched World Youth Day and, famously in Galway, declared “Young people of Ireland, I love you!”

For more information about the awards and how they work, see thepopejohnpauliiaward.com